I arrived in Puno at a great time of the year. They were in the midst of a festival known as ‘la Fiesta Jubilar de Puno’ which commemorates the town’s inception 340 years ago. Parades, concerts, markets, and all other such affairs were taking place, but the main event wasn’t until on the morning of 5th when two people embodying the mythical figures of Manco Cápac and Mama Uqllu – the Adam and Eve of the Inca civilisation – rise out from the lake and march into the city in search of land on which to build their empire.

I still had a couple of days to wait for that but in the meantime, there were other attractions to keep me occupied.

I went to visit both Cutimbo and Sillustani, two sets of ancient ruins located upon the mountains nearby.

Cutimbo wasn’t quite as impressive as Sllustani in a structural sense, but it did have the bonus of being home to some primitive cave paintings and it was easily accessible via public transport. The morning I went there I had the entire place to myself, so I got to wander around it alone and connect with its energy in a way which isn’t possible when a place is crowded. 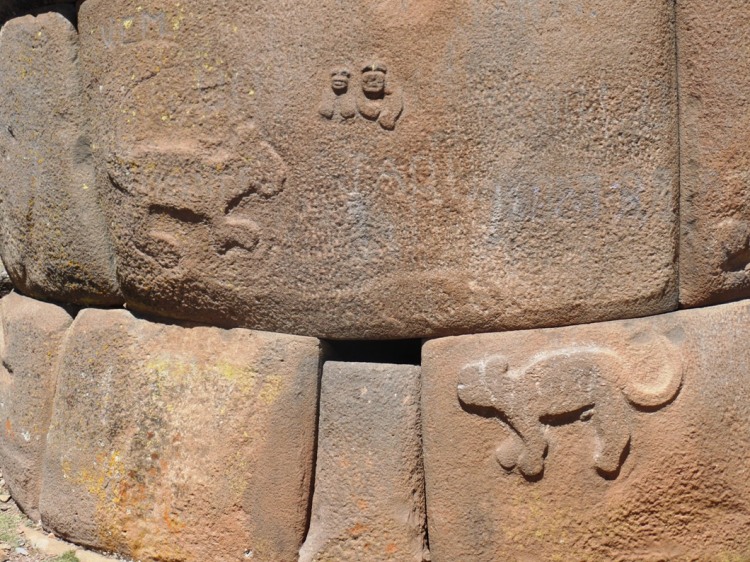 These edifices are tombs. The Tiwanaku people practised a tradition of ancestor-worship which was later adopted by the Incas too. 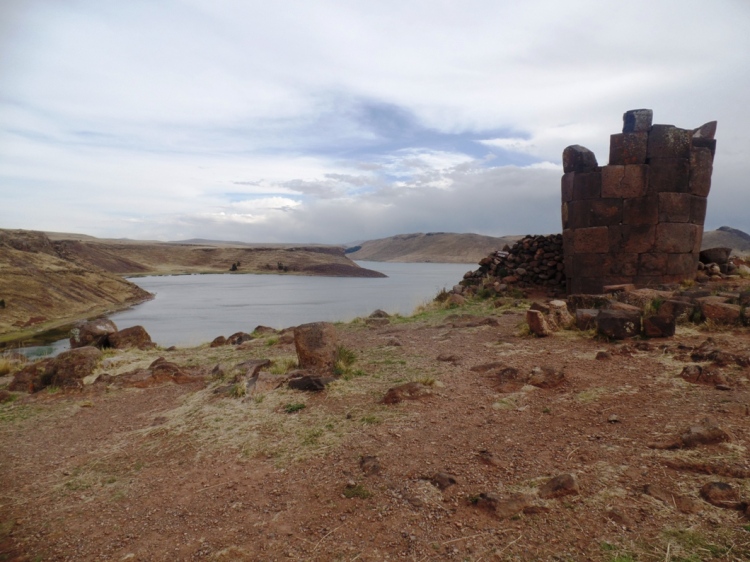 I went to see Sillustani the same day. It is a much busier site than Cutimbo and I was forced to book it as a tour as transport there is difficult. The structures are quite similar only there are more of them.

There are also some wonderful panoramas of Umayo Lake.

Another day, I went to Puno’s Carlos Dreyer museum, which was small but charmingly provincial. It was home to lots of ancient relics and a collection of art, both by Dreyer himself and other local artists. 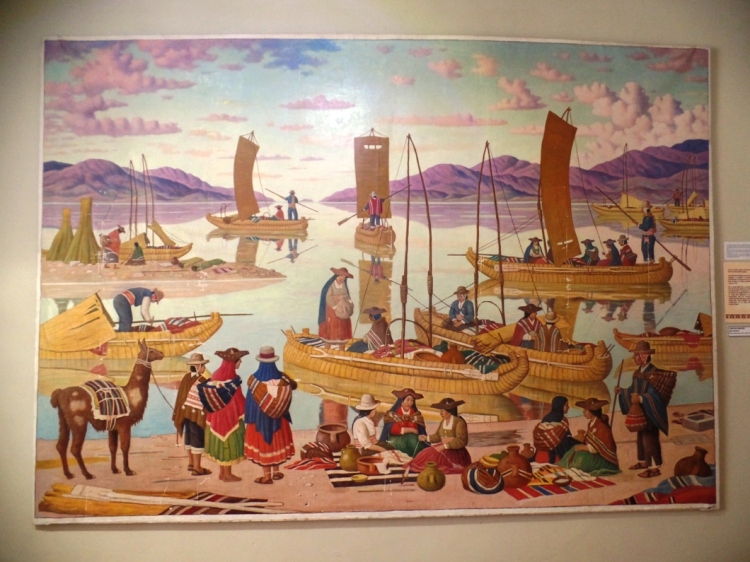 And then, when the morning of the 5th finally arrived, I walked over to the pier where the ceremony was to begin. I came an hour early but the place was already crowded. I chose a spot and waited.

Eventually, young women and men dressed into traditional clothing walked out into the road in single file. They had their palms facing outwards (which I am guessing was in reverence to the Sun). Once they passed, we had to wait for a little longer, and then I both saw and heard a commotion coming towards us.

As you can see in this video, the moments proceeding Manco Cápac, Mama Uqllu and their entourage’s arrival, were a little chaotic. Many of the people in the crowd were shouting and I think it was in complaint about how many people with cameras were hovering around, blocking people from actually seeing the event. And why were there so many police officers, too? It seemed a bit overkill. And, finally, why weren’t the officers – as many of them as there were –  doing their job, and getting the annoying people with cameras to move out of the way?

But, besides from that, this beginning to the festival was very interesting. A man came with burning incense, and people (including myself) placed their hats over the fumes, which I am guessing was some form of blessing. People performed limpias (cleansings) with wreaths and, during those moments, I could feel a very strong religious fervour in the air. It seems that many of the folk traditions from Lake Titicaca’s pre-colonial times are still alive.

After the initial entourage had passed, there followed a series of parades. People in traditional clothing danced to live music and they came in waves. It seemed to me that each group came to represent a  different district in the area. Here is a short video from the start of it, but if you would like to see more there is a link at the bottom of this blog to my entire album. 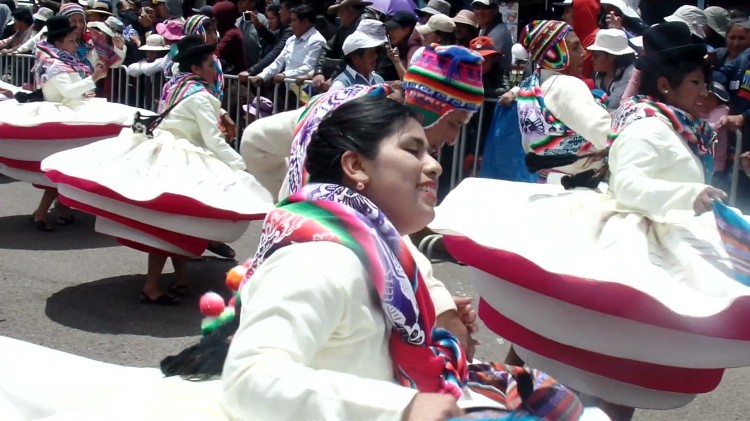 It was over in less than an hour, but it felt longer. People dispersed and I went to have lunch.

Later on that day, I wandered over to the plaza to see if anything was going on and saw people were claiming spaces on the steps outside the cathedral. It looked like something important was about to happen so I sat down.

I was told by the other people waiting that another parade was due to commence in half an hour but, in true Latin American fashion, it was an hour beyond that before anything actually happened. The first activity was Manco Cápac and Mama Uqllu and their entourage passing through again, and then followed a brass band and cowboys riding Peruvian Paso horses (which are famous for their strange but beautiful gait) (video here). 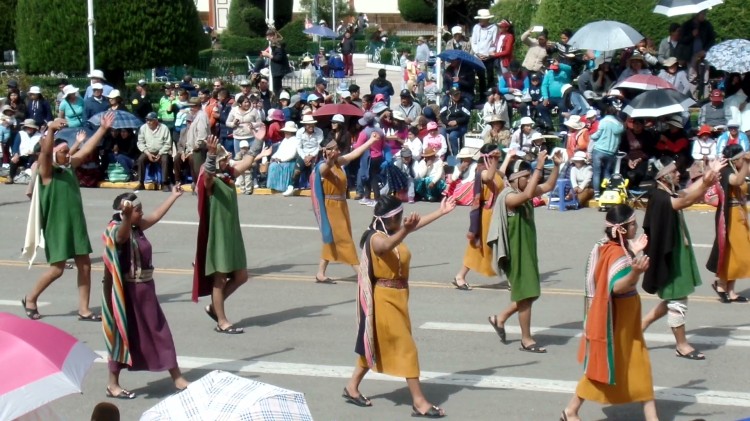 After that, nothing happened for a while, but I knew something was coming though because everyone remained were they were sat and stared out into the plaza expectantly. 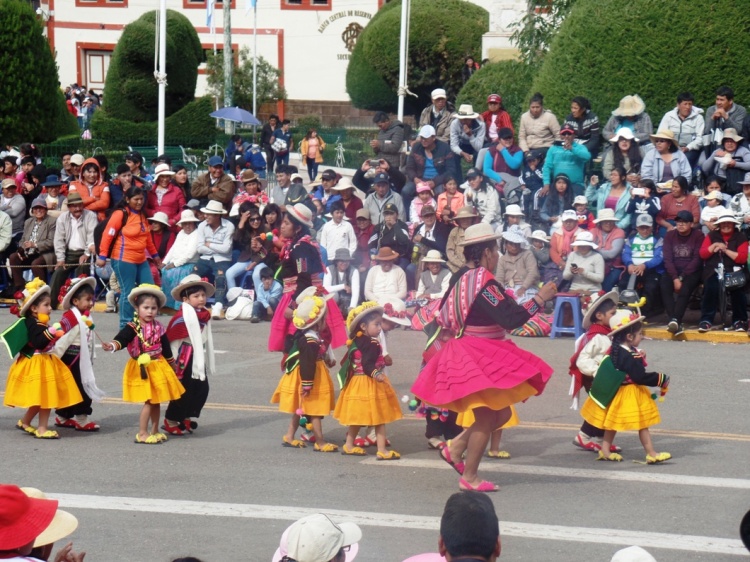 Eventually, a series of parades started. At first, the cavalcades all featured small children supervised by adults (video here).

It was cute, for the first half an hour or so.

HOW MANY CHILDREN ARE THERE IN PUNO? I thought after an hour had passed.

I know you are probably thinking that I just don’t like children and am being a grump, and there is possibly some truth to that, but you try watching over an hour of half-awake children bumping into each other and failing at basic choreography, and then tell me you don’t want to tear your hair out. 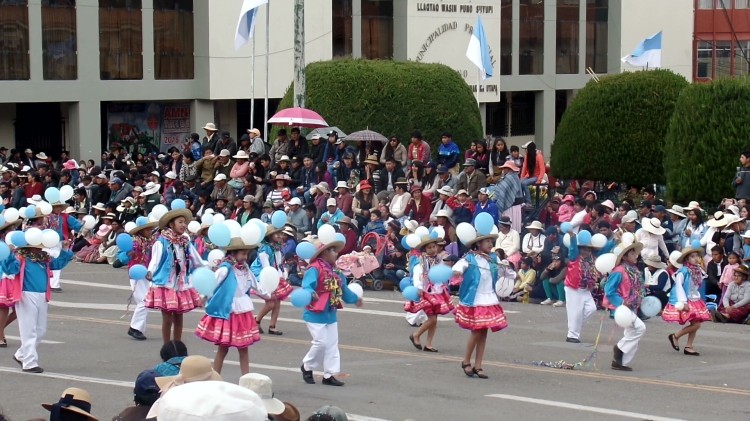 I fought back the temptation to ask people around me if this entire parade was going to be just children or there was something else worth waiting for later, but I suspected that it wouldn’t go down very well. I noticed then that most of the audience were middle-aged women, probably all waiting for that moment that it was their child in the parade. I couldn’t see many fathers. Most of them were probably drinking pisco somewhere. It all began to make sense. This was the sort of affair only a mother could love. 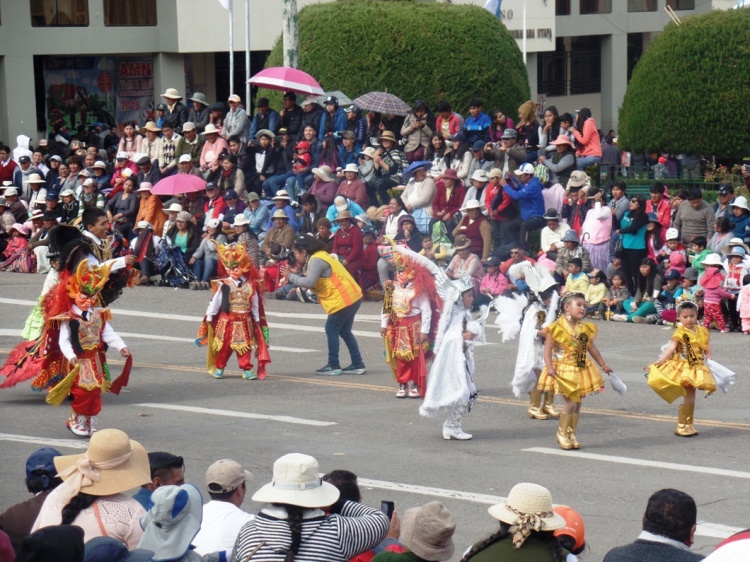 I considered leaving, but I felt compelled to stay just in case it got better. Not just that, but the crowd was so tightly packed by then I couldn’t see a way out. I was wedged in.

It seemed to go on forever. It got to the point that every time a banner appeared at the corner of the plaza – announcing the next school taking part in the procession – I thought. “NOOOO! Please! Not more!”

“They have trapped me…” I thought, after almost two hours had passed. “I am not going to make to Bolivia or Chile… I am not going to see my boyfriend, friends, or family ever again. I am going to grow old and die here…”

Eventually, after what seemed an eternity, the children taking part in the parades became a little older in age and their performances improved. To be fair, this one (video here) was actually really good. It inspired me to stay longer, but eventually, I realised that it was an exception. Most of them were still rather lacklustre. 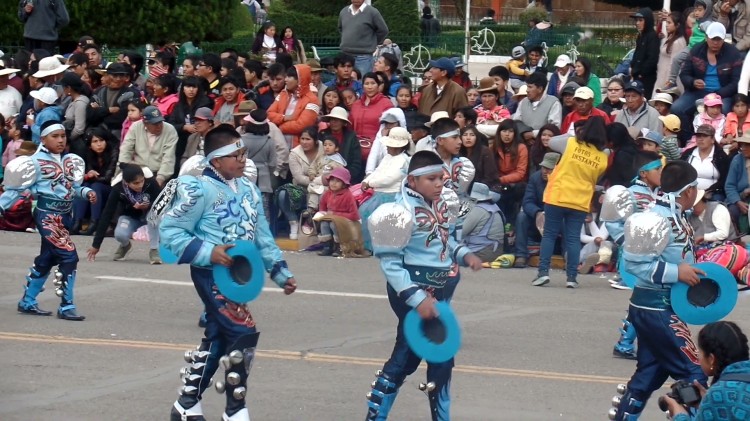 “Maybe the schools with bad parades are focussing their energy on the sciences, and they will produce great minds…” I told myself. It helped me get through a little longer. 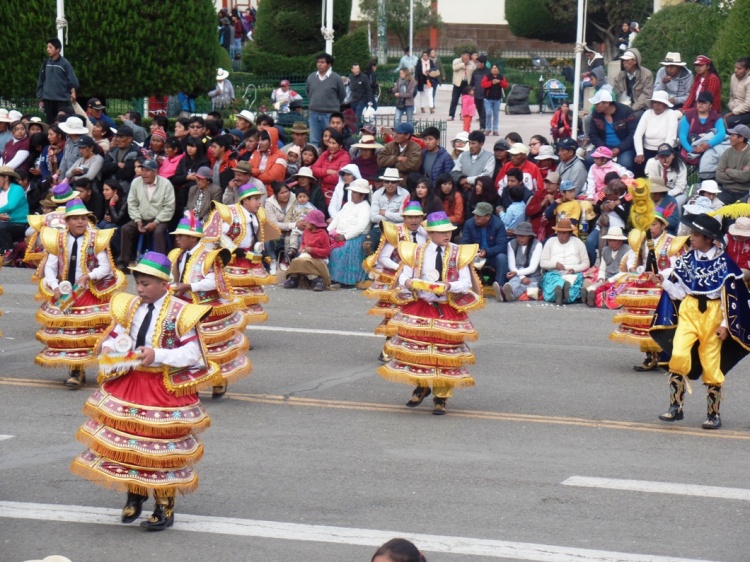 But then, a few minutes later, I saw this rather lazy tribute to the fire services. It broke me.

I got up. The crowd had thinned a little by then (I guess I am not the only one who got a little bored) so I managed to get out. 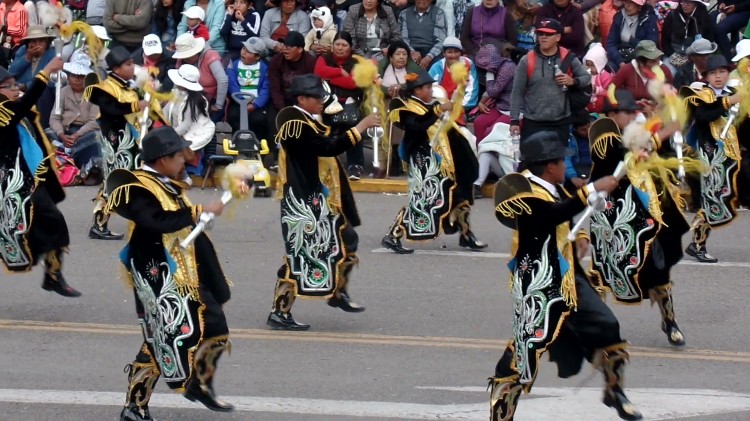 But the thing is, as I was walking away from the plaza, I passed some of the upcoming parades and some were good again, so I found myself lingering.

I eventually developed a system. If the parade was good, I stayed and watched. If it was bad, I travelled into the future by walking further up the road to see the next one. It was a good system. 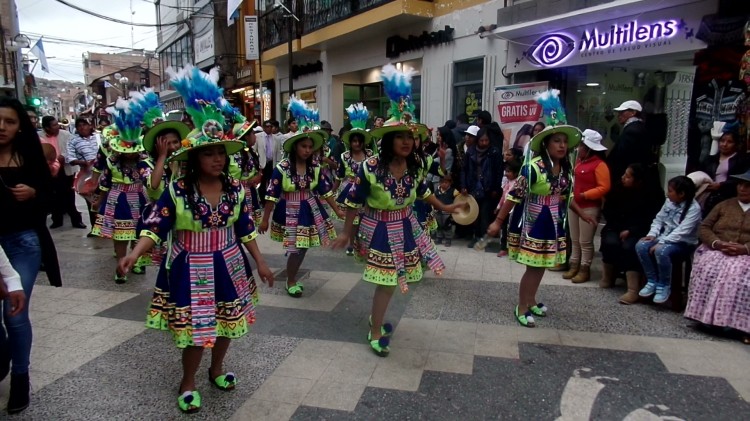 For a while, I was on a narrow street. The dancers didn’t have as much room there, so I suspect they were not at their best, but it was nice to see it this way for a while because it was a more immersive experience (video here).

“This is what I came here for!” I thought when I reached Parque Pino (video here). I stayed there for a while and watched some performances from outside San Juan Church. 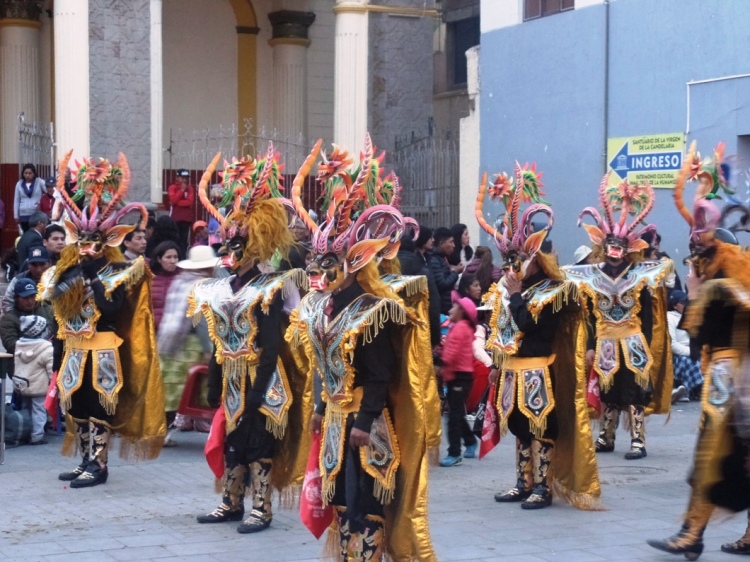 Admittedly, I didn’t stay till the very end, but I think I was pretty close. It had been over five hours since I originally sat outside that stop outside the cathedral by the time I left, and it was well into the evening. I was tired, it was getting cold (I had not brought a jacket out with me) and I was needing to go to the toilet quite badly so I went back to my hostel.

Puno Festival was an awesome way to finish off my time in Peru and I am very glad I plotted my itinerary so that I was passing through there at that time. I know I may have complained about parts of it being a slog, but some of my comments were tongue in cheek and, no matter how ropey some of the choreography was, the costumes were almost always interesting.

The next day I was crossing over the border into Bolivia, marking a new chapter in my journey.

I have only shared a small amount of the videos I took from Puno festival here, to see more of them (as well as photos from other parts of Lake Titicaca) click on this link.

To read the first part of my time in Lake Titicaca, click here.