For the third part of my time in Lake Titicaca, I crossed over the border into Bolivia. A country I will spend the next five weeks exploring. I swiftly noticed a very different ambience in the air. Bolivia’s standard of living is lower than Peru’s, and it was like travelling back in time a little. The streets looked older and were a little less maintained. Hotels advertised that they had hot water like it was a luxury. Men pushed wheelbarrows filled with vegetables down the street. There was a certain charm to it all. Not that I am glamorising poverty, I just think that everywhere has its own allure and countries shouldn’t be written off just because they are not quite as clean and comfortable by first-world standards.

Copacabana, the primary base for exploring Lake Titicaca from the Bolivian side, is quite different to Puno. It is just a small town and, whereas Puno has multiple industries, Copacabana seems to survive almost exclusively from tourism. It was certainly much more postcard-worthy. I particularly liked its cathedral just by the main plaza and it was the first place I visited.

My first day, I focused upon exploring the sights just a stone’s throw away. After wandering around the Cathedral, I went to Horca del Inca just outside of the town. It involved a steep climb but there were lots of interesting rock formations along the way.

As well as wonderful panoramas of Lake Titicaca.

The main feature of this hike though is an old astronomical observatory. This site has a  misleading name because it is actually a pre-Inca site built by the Chiripa people, who held ceremonies here during the winter solstice when the sun is aligned with the opening in these stones.

Later in the afternoon, I climbed up Cerro Calvario which is on a peninsula overlooking the lake. It is a famous spot for watching the sunset but on that evening it was cloudy. Bolivia is entering its rainy season, so it is not the best time of the year for clear skies. It is not too wet yet though and one good thing about visiting this time of the year is that it is less crowded.

There were some great views overlooking the lake though, and the sunset, even if you couldn’t see it fully, did cast some interesting textures on the horizon. I drank my first Paceña – one of Bolivia’s national beers – and watched it for a while before making my way down to Copacabana.

The next day I went on a day trip to Isla del Sol. Originally I intended to spend the night on this island, but then I found out that most of it is currently closed off due to an ongoing conflict. It seems that tourism, and all the money it brings, has changed this community. Those of you who read my blog regularly will be aware that I am not one to shy away from calling out poor behaviour of first-world people when they visit other countries and how they sometimes ruin them, but this is one of the rare occasions where it appears that the fault of the tourists rests no further than their mere presence, and it is primarily the behaviour of some of the locals which is to blame.

I have both done some research online and spoken to some of the residents of Copacabana about this issue, and it seems there are many complex reasons for the developing of this feud. Tensions did begin, rather predictably, with money. Tourists are charged an admission to enter the island (which is fair enough, as we are coming in hoards and there is a certain amount of maintenance involved when a community gets bombarded by visitors). Eventually, some of the locals began imposing their own extra fees upon visitors walking the pathways which connect the north and south of the island. Because these charges were not actually authorised or regulated by any particular official authority, some of the other locals (quite rightly) got annoyed because this money was just going into the pockets of rather greedy individuals instead of benefitting the community.

Ever since tourists have only been allowed to the south of the island and both the centre and north have been declared off limits until this feud has been resolved.

With only the south being accessible, it is very debatable whether it is worth spending a night on Isla del Sol now. On places like Tripadvisor people seem very polarised. Half say it is one of the most beautiful places they have been to in South America and staying the night is absolutely compulsory to get the full experience, while the other half say that it is a tourist trap where you get constantly harassed all day and there isn’t much point in staying because most of the island is closed. There isn’t much middle ground…

I was very torn by all this conflicting information, equally driven to stay overnight or just do it as a day trip. What eventually swayed it for me, was finding out about the way the boatmen behave, which I will now explain.

When you buy your ticket from Copacabana to see the islands, the price is quite cheap. A return is only slightly more expensive than a single if you are coming back the same day but, for some reason, they do not sell returns for the following day if you wish to stay overnight. I have heard reports from other gringos that people who stay overnight are often taken advantage of by the boatmen who inflate the price for the journey back by more than 50% of what they paid for their original journey there, knowing that the tourists have no other choice but to pay or be stranded.

So in the end, I decided to leave my stuff behind in Copacabana and just go as a day trip.

The next morning, I and the other people on the boat were first taken to Isla de la Luna, Isla del Sol’s smaller sister. It was once home to an Inca nunnery of sacred virgins and some of the relics from this epoch remain.

You are only given an hour on Isla de la Luna but with it being so small it is enough and you have plenty of time to explore the ruins and walk across its spine for some beautiful panoramas. To the west, you can see Isla del Sol.

To the south, peninsulas from the mainland.

And, to the east, apparently you can usually see the white peaks of the Cordillera Real, but they were covered in clouds that day.

After our short time on Isla de la Luna, we got back onto the boat and were taken to Isla del Sol. 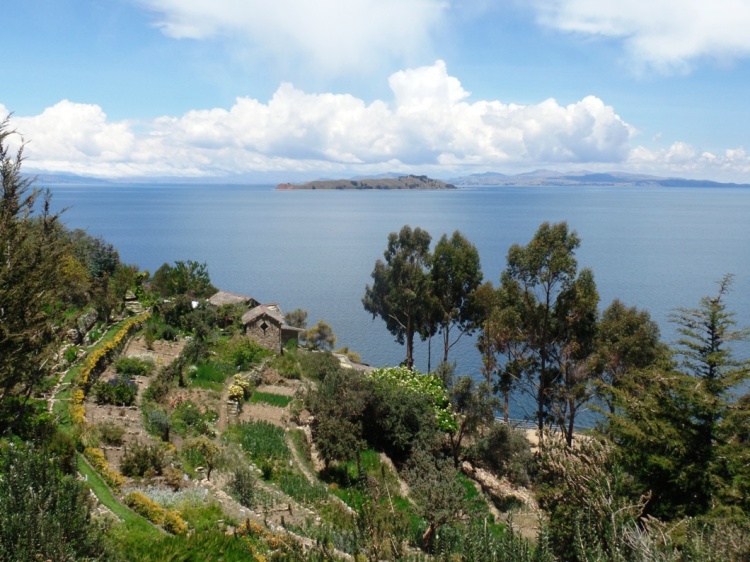 Of all the islands I have been to on Lake Titicaca, Isla del Sol hands-down wins the award for being the most picturesque. There really isn’t any competition.

During the two hours I was given to wander, I did manage to see most of what the south of this island has to offer. I climbed its two highest peaks, explored Yumani (its main village), and also walked through a forest. 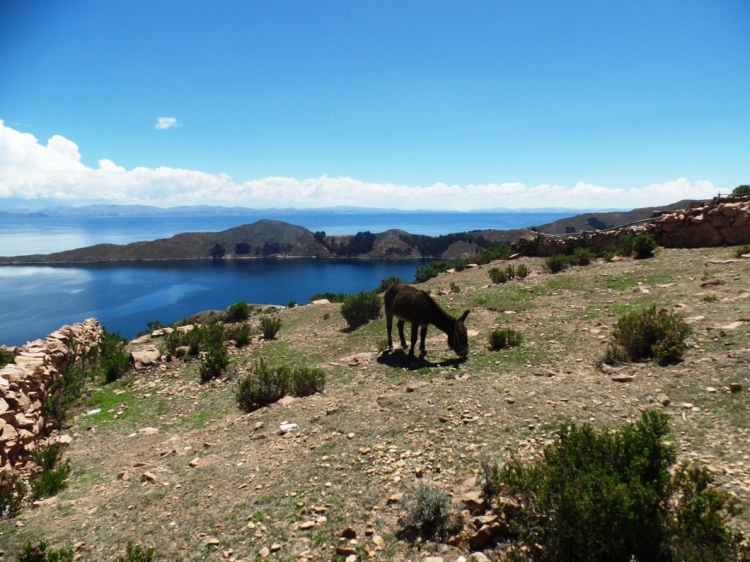 I didn’t bother walking to Pilko Kaina – the Inca ruins – though, as I saw them from the boat on the way in and they didn’t seem worth the long walk when there were such stunning views everywhere else on the island.

So  I found the time doing it as a day trip just enough. But if you are reading this trying to make the same decision, bear in mind that I am a fast walker and even I felt a little rushed. A part of me felt that it would have been nice to be able to take my time and relax there overnight, but my wallet was certainly happier that I came to Copacabana, as accommodation and food are much cheaper there. I also didn’t have to deal with the boatmen the next day.

Did I make the right choice? I am still not sure, to be honest. I can’t give you a straight answer over the ‘stay or go’ argument. Like I said, Isla del Sol is the most beautiful part of Lake Titicaca, but what others have said about it being touristy is also true. Like most places, Isla del Sol is complex. It has many sides to it and many different people you may end up interacting with. And thus, your experience there is partly based on luck and who you bump into. I do hope that Isla del Sol recovers from its rough patch and the community learns to adopt tourism in a healthier way.

For jaw-dropping beauty, Isla del Sol is a must-see, whether you stay overnight or not but, if you wish to see island culture on Titicaca in a more authentic form, then I do suggest visiting Isla Amantani (on the Peruvian side). Have the best of both worlds and see them both.