The first thing I saw, as I waded out to sea, where lots of starfish scattered along the seabed.

And that was all I saw, for a while. I carried on swimming and eventually came across some corals, too, and a few little critters. None of it was anything particularly exciting or new to me, though: I had been in Indonesia for almost two months by this point and at least a third of that time had been spent by the sea. I had swum with manta rays, sharks, morays, dozens of turtles, the list goes on…

Just as I was beginning to think, “What is the big fuss about this Bunaken place?” I then caught a glimpse of some bright colours glistening in the blue ahead. I swam faster.

When I reached the ocean wall, the first thing that hit me was how striking the coral was. It was like a cliff edge in some kind of strange and beautiful alien world. It went so far down I couldn’t even see where the ocean floor was and there were hundreds of tiny fish in a whole variety of shapes and colours swimming around the face.

The second thing that hit me was a strong current, which abruptly began to pull me downstream. I fought it, trying to pull myself along the surface with breast-stroke.

I then noticed that between all the shoals of fish there were two figures ahead – fellow snorkelers, hanging on for dear life to a buoy attached by a rope. They were motioning for me to come join them.

I switched to front-crawl and swam hard, fighting the drift. Once I had reached them and safely grabbed hold of the rope, I pulled my head to the surface.

“Crazy currents, huh?” one of them said.

“Yep. It’s awesome down there, though,” I said, briefly dipping my mask beneath the water again.

“You don’t have any fins!” one of them exclaimed, laughing.

“How long have you been here?” I asked.

“Literally just got here. Is it all as good as this?”

“Nice… anyway, I am going to swim up there now,” I said. I thought I could feel the current weakening, and I definitely wanted to see more.

I let go of the buoy, and swam off. It was hard work, but after a hundred meters or so the current eased.

I had never seen so many shoals of fish in my life, nor coral as abundant. Yeah, there weren’t any sharks or any other predators of note, but I swiftly realised that Bunaken doesn’t need larger creatures because it is more about the micro-life.

I swam all the way up to the northern peak of the island, and every span of the journey was spectacular and teeming with life. After completing what was probably the best snorkelling I had ever ventured out on, I retired back to by beach hut behind a small patch of mangroves.

I ended up staying on Bunaken Island for three days. On the final day Roy and I signed up for some scuba diving, but it was a bit disappointing. Firstly, because we didn’t really see anything else by going deeper because there were actually more fish nearer to the surface and, secondly; the dive outfit we were taken out with (Immanuel Divers) weren’t very professional (no buddy checks, very little guidance underwater, Roy’s depth gage didn’t work, as well as a few other things). We signed up for three dives, but Roy only completed one; I gave up after the second.

We left, and made our way to Tangkoko Nature Reserve.

On our way there we passed through a town called Girian where by a stroke of fortune we bumped into Jenly, who just happened to own Tarsius Homestay which is situated just outside the park headquarters. He gave us a lift there and, along the way, told us many stories about the park, the creatures which lived there, and about how crew from the BBC Natural World series stayed with him while filming Meet the Monkeys.

When we arrived we were fed and told about all the different guided expeditions we could be taken out on. As well as all the jungle excursions there were also dolphin spotting tours being run by local fisherman. We were told that the dolphins nearly always turn up and sometimes, if you are lucky, you can even swim with them. Roy didn’t have time for this (as it meant staying for an extra day and he had a flight to Jakarta to catch) but I did.

Myself and the four other people were taken out on the boat the next day and were apparently very unlucky; there were no dolphins that morning. It was a shame but, if they did turn up, swimming with dolphins is probably an experience I would have remembered for the rest of my life. If you don’t ever take chances like that, you’ll miss out on some amazing experiences.

I arrived back from that rather disappointing tour with plenty of the day still left. So, what did I do?

So I did something a little bit naughty, and snuck in.

I thought that because I didn’t have a guide who knew their way around the place there wasn’t much chance of me finding anything too exciting. I saw a few birds, lizards, and a black squirrel. 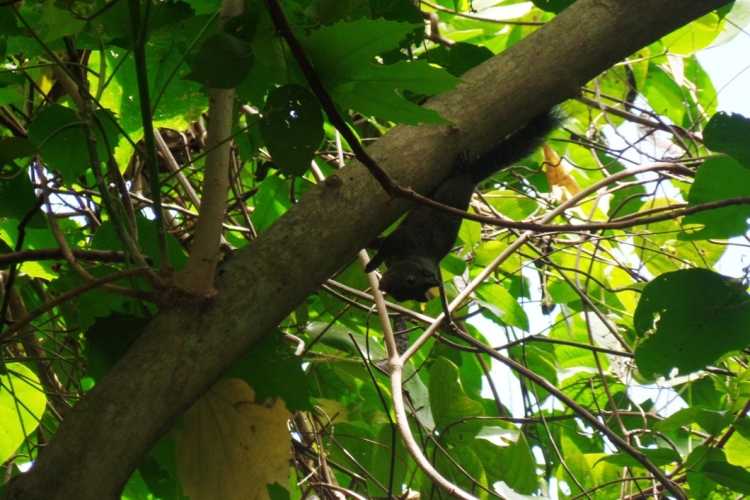 I wasn’t at all expecting to stumble upon these guys.

Celebes crested black macaques. They are indigenous to Sulawesi only, and now, thanks to the destruction of most of their natural habitat and poaching by locals, on the red list of endangered species. 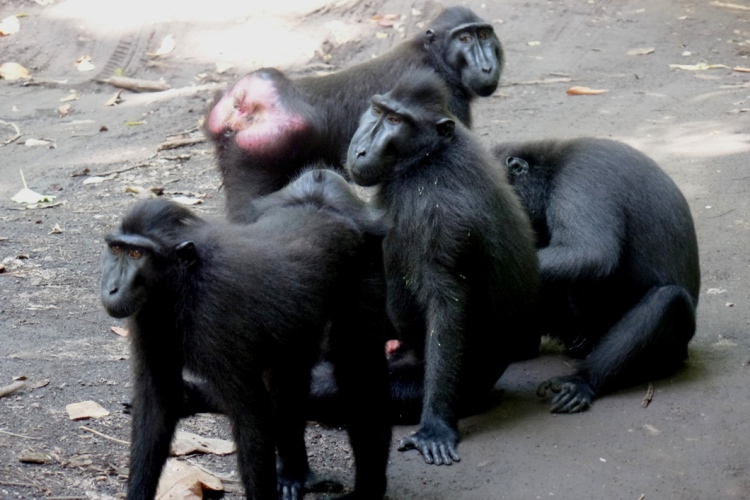 It was pretty awesome to see them, but they were a rather large group (there were many more in the trees around me) and it made me all too aware that I was alone in the jungle. I soberly made my way back to Tarsius Homestay, sat on the balcony with a Bintang, and read a book while listening to the jungle.

The following morning I woke up at 4 am, got dressed, sprayed myself with plenty of repellent, and went to meet the others for our jungle trek.

Jenly was taking us out himself, and also with him was Untu, a bird specialist. 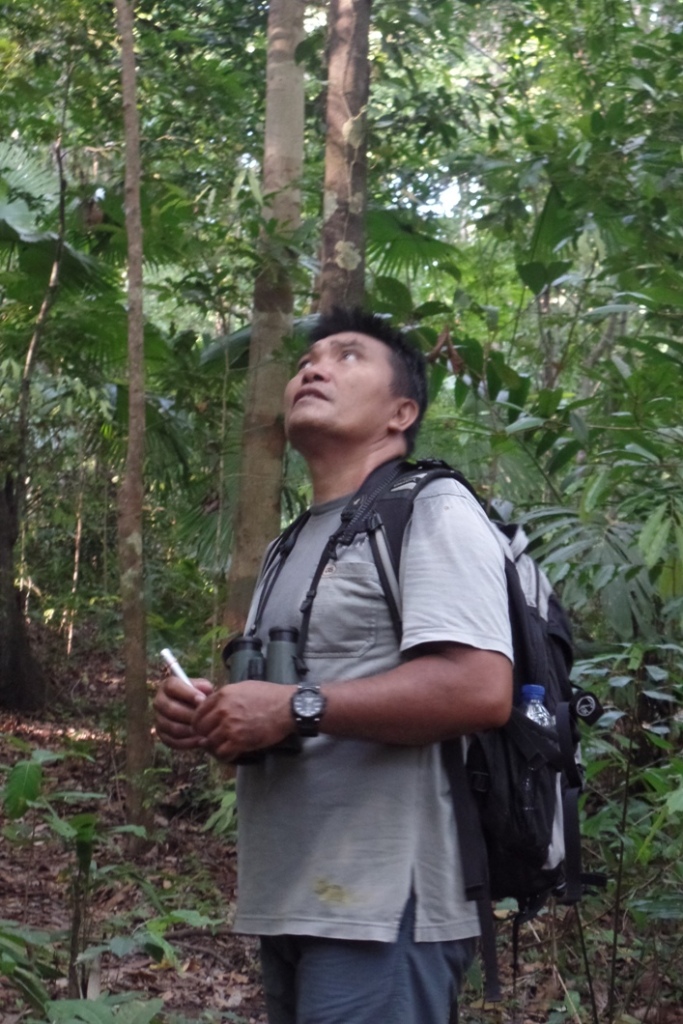 It was still dark when we set out, so we walked by torchlight. We got to hear the dawn chorus and even saw a few tarantulas along the way, but they all crawled back into their tree-holes before I could snap a picture of them. By the time it was light we reached a tree where the tarsiers come home to roost after a long night of hunting insects.

When we had finished admiring and taking photos of them, Jenly went off on his own to see if he could find out where the monkeys were while Untu took us bird-spotting. He found a red-backed thrush, which is something we were quite lucky to see.

The hornbills were probably the highlight of the entire day for me. We found about five of them, in all, and they were amazing creatures. Whenever they flew you would hear a great whoosh-whoosh as their wings beat against the wind, and the sounds they made when they opened their beaks was like nothing I have ever heard.

We also came across a pair of cuscuses, but they were sleeping and could only be seen with a pair of binoculars. They were far too high in the treetops for me to take a photograph. The same was true for the woodpeckers and some of the other species of bird we spotted with Untu’s binoculars.

Time seemed to fly by very quickly in Tangkoko; before we knew it we looked at our watches and realised that we had been there for over six hours and it was time to head back. We found another group of the macaques on our way out though, which was a great relief to the four other people I was trekking with who had not seen them yet. 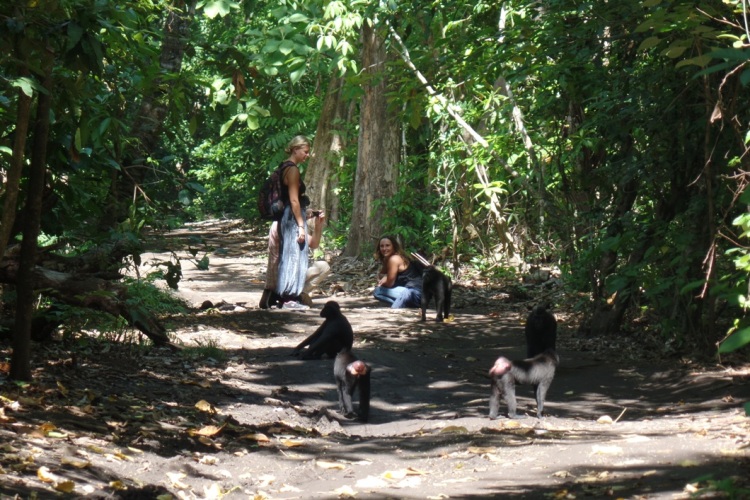 I then went back to my room, showered, packed my bags, and got ready to begin a new chapter of my journey. After over three months of travelling together, mine and Roy’s paths had now been destined for different directions; he was heading to Sri Lanka, and I, to Sumatra. From this point on, unless I click with someone who just happens to be on the same route as me, I will be a solo traveller until I reach Taiwan.