At the end of our four day journey at sea we were dropped off Labuanbajo, a charming little port town on the west coast of Flores.

Not long after stepping out onto the streets I bumped into a familiar face; Gilles, a French guy who was staying in the bungalow neighbouring ours when we were in Gili Trawangan a week before. He had a new friend with him; Bertrand – another French biker he met along the road – and the five of us went for a beer at a restaurant which had a great sunset view.

We took a day to get acquainted to being on dry land again and rediscover forgotten luxuries such as fresh water showers and wifi. The three of us still felt a bit like we were still swaying for our first few hours we were off the boat – I believe they call it “land sickness”.

During our journey at sea we had snorkelled around some spots around Komodo Island and Roy and I were so impressed with what we saw then that we ended up returning there with tanks of air strapped to our backs for some scuba diving. Gilles and Bertrand joined us.

“Manta Point” was definitely the highlight of the three spots we were taken down under. It is a cleaning station for manta rays; where the creatures go to let other little fishes nibble them clean. The currents were very strong so it was classed as a “drift dive” – it was very fast-paced and exhilarating.

I also saw four bamboo sharks, a grey tip shark, a white tip shark, dozens of parrot fish, lion fish and many other species, as well as lots of turtles, some exotic-looking crabs, and forests of beautifully preserved coral. Komodo Island has some of the best marine life I have ever seen.

The next day we hopped onto a bus and began to make our way east. The locals became nicer and atmosphere began to change, like it always does when you get away further away from the tourist trail.

Ruteng was our first stop and it was a predominantly catholic mountain town. We were a bit confused at first because the place seemed to be swarming with an implausibly high population of school children who all had biblical names like Lazarus, Paul, and John. They kept stopping us to ask random questions such as; “where are you from”, “where are you going”, and “how many brothers and sisters do you have”, and we eventually found out it was because many of them were studying tourism and their teachers were encouraging them to speak to foreigners so they could practice their English.

We also eventually found out why there were so many of them: most of them are actually from surrounding villages and were sent to live in boarding houses in Ruteng to get an education.

On our first morning in Ruteng we went for a little trip to a nearby village so we could see the Spiderweb Terraces. 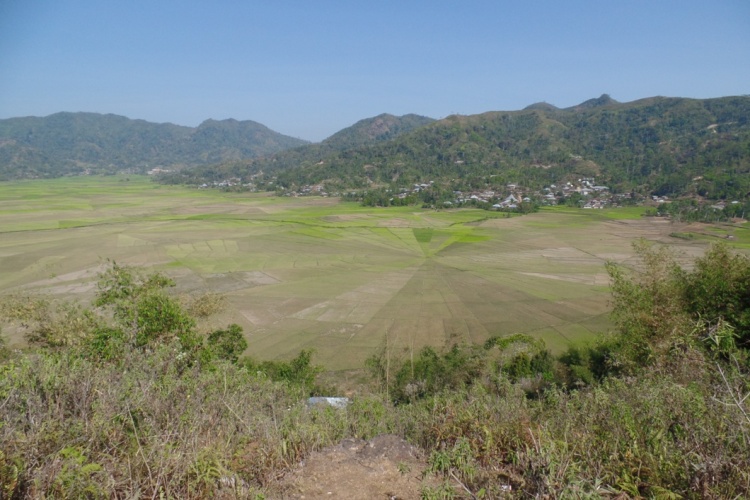 We originally planned on venturing out on a trek and overnighting at a village called Wae Raebo we had heard good things about, but a quick search online quickly put us off that idea. Wae Raebo has already been institutionalised and formally converted into a “destination” by some bigwigs in Java, who, by aiding the villagers in setting the place up for tourism, now insist that all visitors must pay 250,000 rupiah for the privilege of sleeping under a blanket on the floor.

It wasn’t just the money that put me off – I have paid much larger sums in the past for things I have wanted to do – it was more that I doubted how authentic an experience like that would be. The three of us eventually agreed to give it a miss.

It was Kate who ended up finding an alternative for us: she got talking to one of the local schoolboys who said that he would give us a free tour of his village if we liked, because he was aspiring to be a guide one day and wanted some experience. It seemed like a good opportunity to catch a glimpse of rural life in Flores so we accepted his kind offer and chartered a bemo. Just as we were about to leave two motorcycles pulled up outside our hotel – it was Gilles and Bertrand.

“Hello again! Where you going?”

“Some kid is taking us to his village. You want to come?”

They quickly dropped their bags off at the hotel and a few minutes later the five of us – with our guide, Patrick – were on our way.

Patrick was notably nervous and didn’t quite know what he was doing, but he was young and definitely had enthusiasm so we were patient with him. He ended up taking us on some crazy climb down the mountain to see a “cave” which didn’t quite live up to our expectations, but the village was nice and the people were very friendly. They were obviously not used to seeing foreigners there because we ended up with a whole entourage of children following us.

Patrick also took us to see their church which had a rather interesting interpretation of Jesus.

When I asked about it, he simply referred to it as, “Jesus with strength of bull”, but I am guessing that his tribe may have once had some kind of bull-like deity before they converted to Catholicism, which they have now forgotten.

When we gave Patrick feedback at the end of the tour we told him that his village was interesting, so he didn’t need to rely upon gimmicks like wild climbs up and down the mountain for people to have a positive experience there. We also tipped him with some money and wished him luck on his future endeavours.

Our next destination was Bajawa, and the journey there was full of twists and turns as we were treated to sights of Flores’ volcanoes and rice terraces from the windows of the bus. Bajawa itself was a quaint little town nestled between forested mountains. It had a cool climate and was a great base from which to explore nearby Ngada villages.

Bena was the first village we visited and, despite the fact that fronts of many of the houses are now souvenir stalls selling ikat, it is still fairly traditional and picturesque with its thatched houses and megalithic structures.

There was also a view point just behind one of their shrines which had wonderful views of the surrounding valley.

We tried to hike from there to a village called Tolelela, but the initial sign we saw at the turnoff might as well have said, “Ha ha. Good Luck!”, as the rest of the trail was not marked and we got lost for a couple of hours. We did see some stunning views along the way though.

On our way back to Bajawa we called in at a couple of other villages. They were not as visually impressive as Bena but they were a bit less touristy so we managed to meet some locals who weren’t trying to sell us something, which always makes for a slightly warmer experience.