In the early hours of the morning we were driven up to the summit of Mount Kelimutu to catch the sun rising over the rim of one of Indonesia’s most prestigious volcanoes.

We ended up staying there for four hours, and I spent much of that time sat near the edge of one of the craters with a book, occasionally staring down at the three volcanic lakes. Each one was a different colour and rumour has it the shades often change. On the day that we were there they were blue, turquoise and black.

It was by far the most impressive sight we had seen so far in Indonesia. As the sun rose higher into the sky the lakes started to glow from the reflected light and we saw some peculiar, almost psychedelic, streaks of yellow in one of them. We could have stayed there all day if it wasn’t for the fact that there wasn’t any food up there and we began to get hungry.

We strolled down the mountain at a steady and relaxed pace, enjoying the mountain views and passing through a few villages along the way. We actually got a bit lost. It wasn’t until late that afternoon till we found our way back to Moni (the town we were staying in).

When we walked up the driveway of our guest house we were pleasantly surprised to find that Gilles and Bertrand had just arrived and, by yet another fortunate coincidence, checked into rooms which neighboured ours. It wasn’t that surprising, really; this must have been the fifth or sixth time we had crossed paths with the two French bikers, and they were starting to feel like old friends.

I hopped onto the back Gilles’s bike and we went for a quick trip to a local waterfall which was, thanks to the fact that it is partially fed by a hot spring, lukewarm and great for swimming. 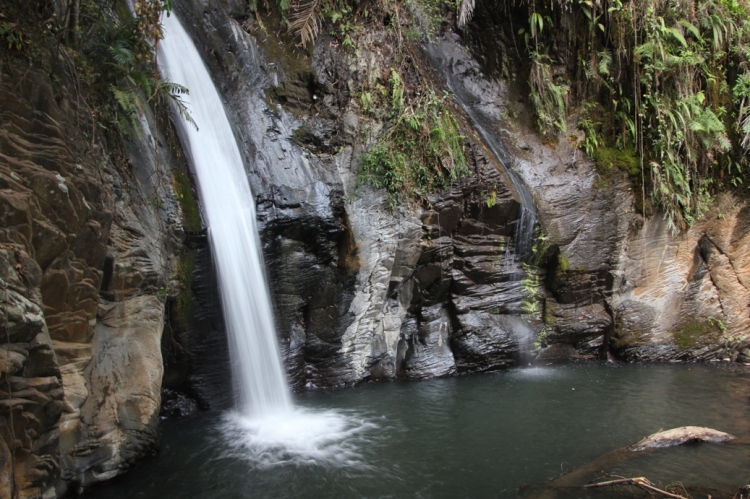 After that we went to a restaurant which had a decked seating area with great views of the highlands, and Roy and Kate joined us. We drank arak: a locally made palm-based alcohol – the natives seemed to like it, so we thought we would give it a try. It was nice. A little bit too nice, perhaps. By the time Roy and I had finished a bottle of it each it was well into the dark hours, he had his guitar out, and I was singing (or attempting to, at least).

Roy, Kate and I got on a bus heading east the next morning, but before we left we told Gilles where he and Bertrand could expect to find us later that day once they had caught up on their bikes. We were on our way to Wodong – a beach on the northern coast – but first we had to make a quick stop in Maumere to book tickets for a ferry we were intending to catch later that week.

We got into a spot of trouble on our way out of Maumere. A group of bemo drivers didn’t like the fact that we weren’t gullible enough to fall for their hiked-up prices, so they followed us around and intimidated all the other drivers we tried to approach. When we did finally manage to escape them and get a ride out of town, our driver was forced to pull to a stop by a car which had been parked in the middle of the road.

And then dozens of men crowded around us.

They were clearly trying to make both us and our driver feel threatened. Our driver got into a shouting match with them which we didn’t understand because it was all in Indonesian. It was clear though, that they were trying to convince our driver to make us get out of the bemo. Probably so that the three of us would be trapped in the middle of nowhere and be forced to pay for more expensive rides with them.

One of them stepped into the vehicle. I could tell by his calm and self-assured, but yet somehow intimidating bearing, that he was the “leader” of this gang. And probably a psychopath, too. Leaders of these mafia-like cultures usually are, and there was something about him… his eyes were cold – there was nothing behind them.

“Hello,” he said, rubbing his hands together. “Where are you going?”

I think we all knew that we had just entered a situation which we were going to have to tread our way out of very carefully. None of us said anything, at first. Who the fuck do you think you are? I was thinking, but I didn’t let out any of my anger because I knew that this was not the sort of person who would take being shouted at lightly. One does not stay leader of a rabble like this for long, if they lose face by letting others get away with standing up to them.

Eventually we just simply pointed to the road ahead, and then to our driver, questioningly. I think Roy mumbled something, but I can’t remember what it was – only that it was calmly assertive. We then turned away, breaking eye contact and making it clear that we were not interested in getting out of the vehicle or conversing with him.

In the end our driver had to bribe them before they would let us past. And he drove away very fast.

It is not very often that I feel unsafe while travelling around Asia, but that was definitely one of them.

Despite all the hassle we went through to reach there, Wodong was a very nice place. The sea was calm, the beach was sandy, and there were just a scattering of small villages nearby, so it was quiet. It was also low season, so we managed to haggle for a pretty good price for one of the larger bungalows.

And this was the view from our balcony:

Gilles turned up later that afternoon and, by virtue of being on a bike, managed to get past the bemo-mafia without any hassle. Bertrand didn’t catch up with us till the next morning though because he drank little bit too much arak the night before. When the five of us were reunited the next day we arranged to be taken out on a boat trip with one of the local fishermen.

We were taken to Babi Island, where we put on our snorkels and explored an ocean wall which had lots of coral and fish, and then to another island which had a stunning white sand beach.

Apart from that, the rest of our time in Wodong was spent playing games of chess, reading books, drinking the occasional beer, taking the odd dip in the sea, and getting to know our new friends better. 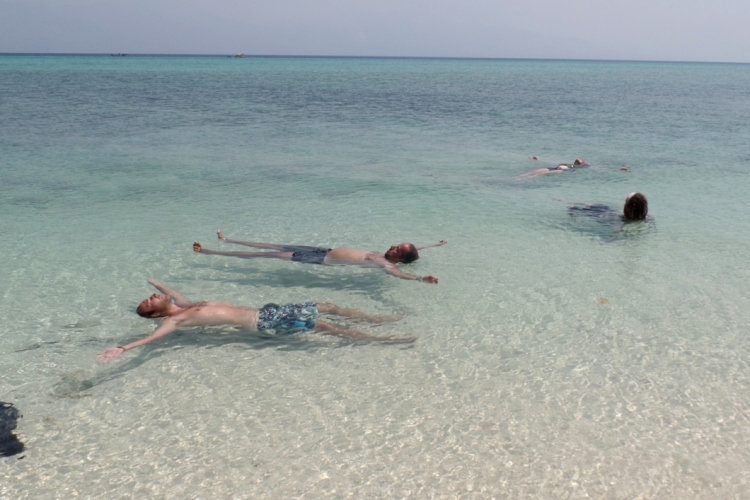 After four days in Wodong, we eventually had to part ways though: Roy, Kate and I had a boat to Makassar we needed to catch, Gilles was heading to Timor, and Bertrand was going to stay in Wodong for one more night before continuing further east. As a parting gift, Gilles taught me how to drive a motorbike with manual gears – a skill I thought might come useful sometime in the future (until then I had only dared to drive automatics).

Our next destination will be Sulawesi, the land of exotic wildlife and the Tana Toraja tribes, where the next chapter of our adventures will begin.