I had originally planned to only pass through Banda Aceh. I am not a big fan of Sharia Law, and it is a town at the nucleus of Sumatra’s very strict Islamic region. There have also been a few incidents of western tourists being abducted by extremists over the years.

However, during my time in Sumatra, every other traveller I spoke to along the way who had visited had only nice things to say about the place so, after a quick re-read of its attractions in my travel guide, I decided I to spend a couple of days there.

I left Pulau Weh early in the morning and boarded a boat back to the mainland. Newly made friends Dominique and Oleg were on the boat too but, while I was destined to stay that night in a room in Banda Aceh, they were planning to be aboard a sleeper bus to Medan. The three of us met up outside the Tsunami Museum later though, after I had checked into a hotel and they had bought their tickets.

The museum was unfortunately closed for lunchtime by the time we arrived, so we ended up going for a wander and stumbled upon something which was, truly, bizarre. 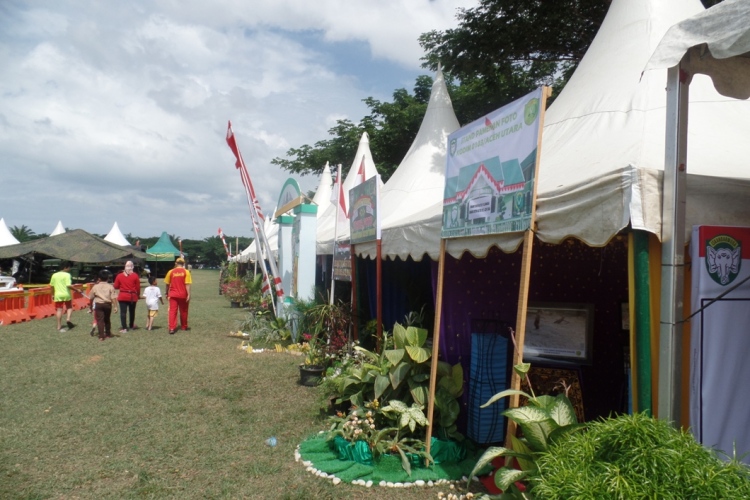 It much resembled an English country fete, with its stalls and carnival-like atmosphere, but instead of donkey riding and hearty games it was filled with guns, artillery and military vehicles. Soldiers greeted us enthusiastically and were insistent we had photos taken with them.

“Do you want to see a big gun?” he replied, grabbing my arm and dragging me to it.

I humoured him by taking a picture.

“But, really. What is this all this for?” I said, casting my arm around the field.

“Why are you here?” I asked, pointing to the ground. “Today. What for?”

“We have a motorcycles!”

Eventually, I gave up trying to understand it, and embraced the madness.

There was also a flight simulator, caged reptiles, and I even found a series of stalls which had framed photos of heart-warming scenes of uniformed soldiers playing with children and aiding civilians. 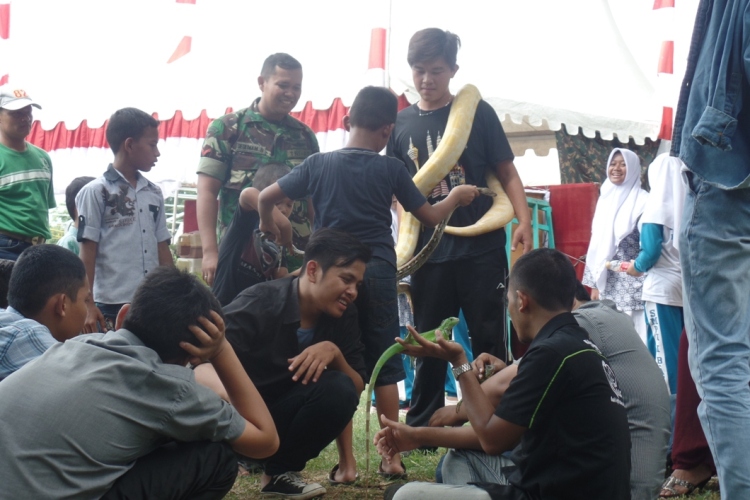 I never managed to find out what it was all about, though.

The Tsunami Museum was tasteful, solemn, and informative. There was a video, photos, lots of information about what happened, educational displays about the science of tectonic plates, as well as a few other things.

In the tsunami which struck Asia in 2004, Banda Aceh was the area affected the most; 167,000 people died, and  most of town was devastated.

The personal stories were the most interesting and poignant for me: photos of individuals were accompanied with details about how they were affected; children who had lost their parents, parents who had lost their children, and families which had lost their livelihoods and homes. It started on a very sad note, but further along the tone became much more positive and it began describing the process of rebuilding the town, showing photos of orphaned children with smiles on their faces because they were excited about returning to school, and telling stories about families who lost each other and thought each other dead, being reunited.

Dominique and Oleg left for Medan that evening, so I spent my next (and final) day in Indonesia alone. I began it with a visit to the Museum Aceh, which had a traditional Acehinese house filled with displays and details of the region’s history.

On my way out I passed the Tsunami Museum again, where there was some kind of remembrance ceremony going on as part of the build up to the upcoming 10 year anniversary of the disaster. 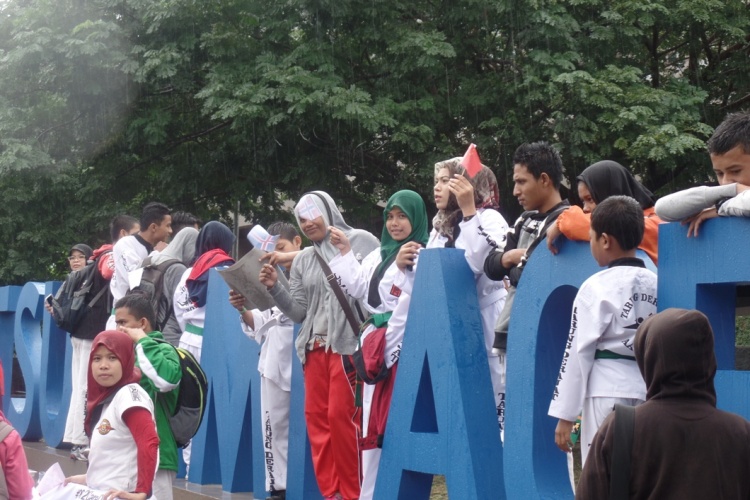 The mood was generally cheerful: people were celebrating the kindness Indonesia received from the rest of the world after the tsunami happened, and waving different flags for all the countries which sent them aid. They were also getting all the passersby (including myself) to sign their name on a long banner.

Apung 1, once I reached it, was an interesting sight.

Once an electric generator ship, it was swept 2 kilometers inland when the tsunami struck, and since then it has remained there as a relic. The area around it has been turned into a Tsunami Education Park, with pictures and memorials, and some of the nearby buildings which were wrecked during the disaster have been left just as they are as an example. 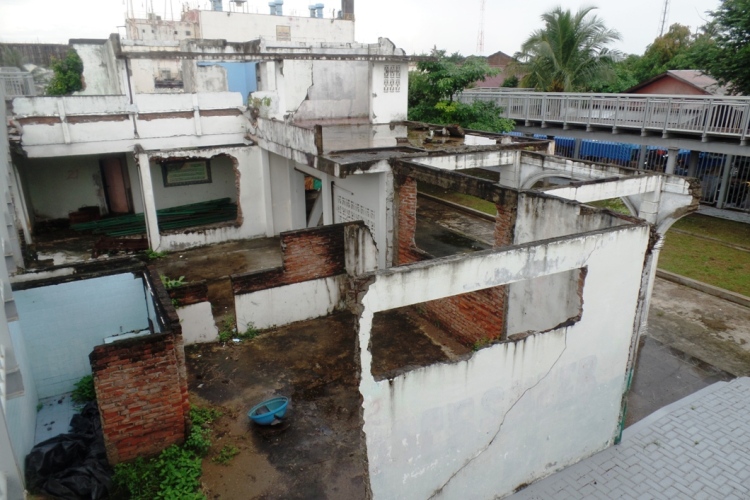 I hired myself a tuk tuk driver for the afternoon to take me around more sights. I went to a mass burial ground for victims, and then after that to Ulee Lheue beach, which is not actually a beach as such anymore – most of the sand was swept away – but the some of the locals still make the most of what they have and spend their free time drinking tea at cafes which have sprouted up along the grass strip and riding peddle boats.

I also went to Lampulu village to see a fishing ship which got swept upon the roof of a house, and has since been maintained there as an iconic image. During the disaster, there were actually 59 people on board who, by some miracle, survived. 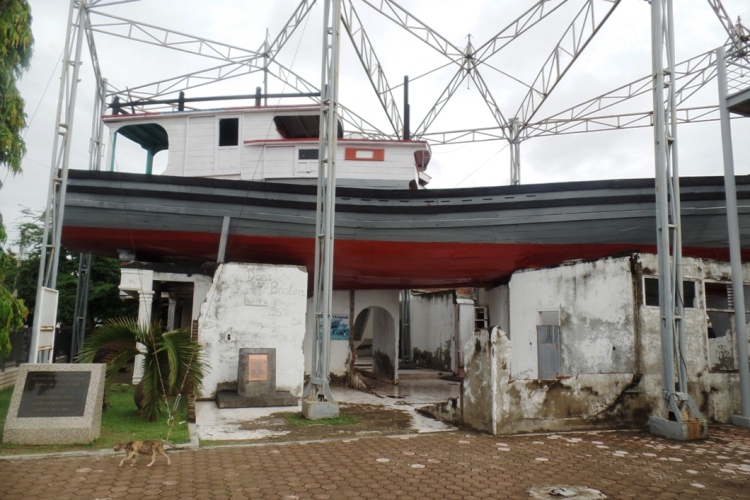 Just outside of it another touching event was happening while I was there: speeches were being given to a small audience by older children. I didn’t understand what they were saying because it wasn’t in English, but there was a generally sombre tone and some of the speakers even broke into tears, at times, but most of them finished off with a brave smile, and the audience always cheered. I suspect they were giving eulogies and recounting personal stories from the disaster.

Banda Aceh was a great way to finish off my time in Sumatra, and I am very glad I made the decision to spend some time there. Sharia Law or not, it is a very special place. It is an example of how humankind can, at times, pull together and achieve great things out of mere kindness. This town has, thanks to much of the international aid they received, managed to do a great job of putting itself back together and, even more importantly, the people there have bravely got on with their lives after they lost everything. When one walks around the streets of Banda Aceh, it is sometimes hard to believe what happened there, not because the rebuilding process has been so successful – there are still landmarks from the disaster everywhere – but because of how bravely cheerful the people are, despite everything they went through.

The next morning I was flying to Taipei to spend Christmas and New Year with some friends.