For our last few days in Bali we based ourselves in Padangbai. Roy’s sister was coming out to meet us so she could be our companion for the rest of our journey through Indonesia and, as a special surprise, she brought Alison (their mother) with her.

The four of us hired out a driver and went out on a sightseeing tour around eastern Bali. We went to see Pura Kehen and Pura Besakih in the morning, both of which were probably the finest examples of Balinese temples we have seen so far.

In the afternoon we went snorkelling around the wreck of the USAT Liberty; a cargo ship which was torpedoed by the Japanese in 1942 and sank just off the shore of Tulamben. It is now one of those humbling monuments to the tenacity of nature: a military vessel, now a beautiful coral garden teeming with fish.

Padangbai itself was a little bit disappointing though. It had been praised and heralded in the Lonely Planet as a “funky little beach town” with a “travellers scene with some cheap places to stay and some funky and fun cafes”, but we were not so impressed. Some places, when they become the focus of tourism, eventually reach a state of decay. This little seaside town’s cove has been clogged up with a few too many boats and the beachfront has become overpopulated by ever-greedy touts, who have between them managed to more than triple the prices of all services in the space of just a few years.

Thankfully though, Blue Lagoon Beach was just a short walk away and there was decent enough snorkelling there to keep us occupied for a day but, after we had done that, we were more than ready to move on. 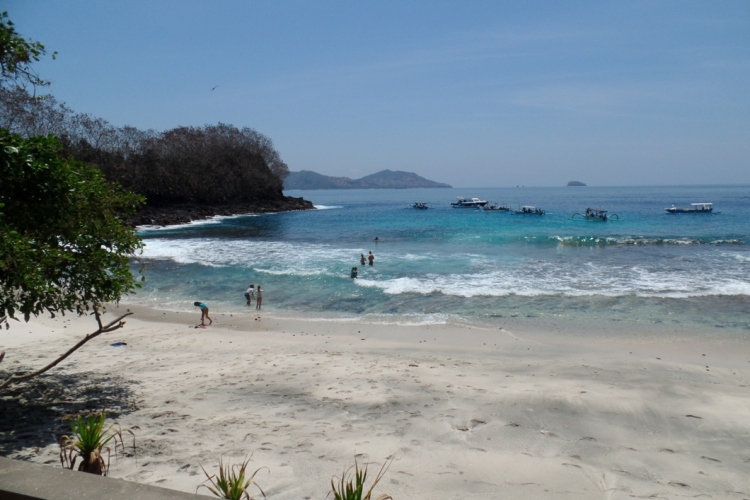 The truth is, we only flew to Bali because it was a conveniently placed airport; we were much more interested in the islands of Nusa Tenggara, east of there. We liked Bali much more than we thought we would as it is a very culturally rich place, but still, we needed to move on because we only had two months and there was much we wanted to see.

We caught a boat out to “The Gilis”, as we thought it would be nice to spend some time at a nice beach, especially as Alison was only with us for a short amount of time. Technically, there are many gilis (small islands) in Indonesia, but only one place – somewhat unfairly, perhaps – has earned the title of being The Gilis, and that is a set of three islands just off the coast of Lombok.

We based ourselves on Gili Trawangan, the largest of The Gili’s and it was, if anything, more touristy than Padangbai, with all its bars and agencies. The beaches were genuinely very scenic though and you could always find somewhere a bit quieter if you were willing to walk. “Touristy” in Indonesia is still on a completely different scale to somewhere like Thailand, so the coral is still fairly intact and the snorkelling was awesome. We saw lots of turtles.

We made a day trip to one of the neighbouring Gilis – Gili Meno – which was a bit quieter and laid back. We would have probably grabbed our backpacks and migrated there if we had time but, as we were planning to move on in a couple of days, it didn’t seem worth it.

Once Alison had caught a boat back to the mainland so she could fly back home, Roy, Kate and I looked into moving on again. We decided to sign up for a four day boat cruise heading east. It will take us past Lombok and Sumbawa, and then on to Komodo island to see the dragons.