Me and my three travelling companions had originally intended to spend our last few days in the Philippines visiting a small village in the north called Kabayan – which is famous for its people having their mummified ancestors stored within caves – but when we looked at the transport options we realised that such a venture would have been impractical with the rather limited ammount of time we had left. We could have just about done it, but it would have meant an entire two days of travelling for just one to spend actually exploring Kabayan.

So instead we ended up going to Baguio – a mountain city in the highlands of North Luzon, which is surrounded by many attractions – and it swiftly became my favourite city in the Philippines. Throughout this blog I am going to catalogue the places we visited. 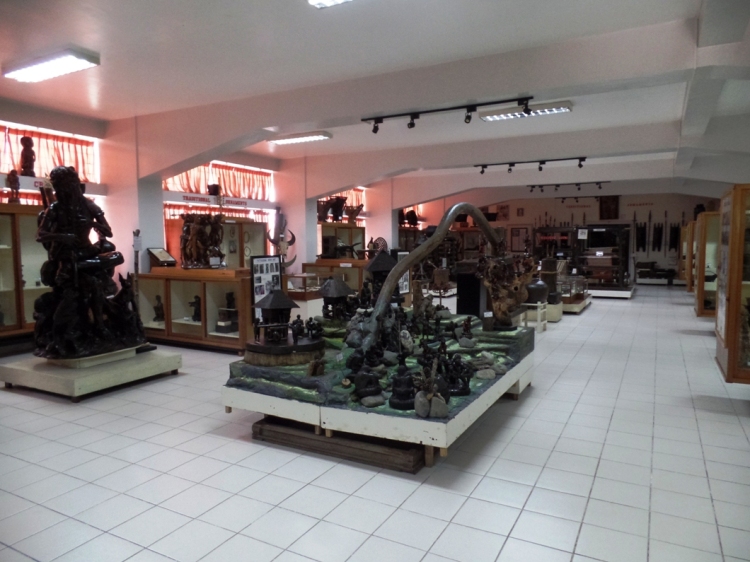 This is definitely somewhere to go if one has a particular interest in indigenous tribes, but it is not for everyone. I visited alone, while my travelling companions – who are not quite as geeky about history as I am – were busy shopping in SM Mall.

Hosted in the basement of the University’s library, it contains a vast collection of tribal artefacts from across the Cordillera, and the exhibition is wonderfully illuminated with enlightening information. The curator, Ike Picpican, is clearly very passionate about his subject and appears to have a particular interest in the magico-religious traditions of animist tribes. I found the details about indigenous talismans – such as tangkils (bands warriors wore around their arms) and dulis (necklaces made from snake vertebrae, which Bontoc women wear to protect themselves against malevolent spirits and thunderstorms) – and the stories about the gods and goddesses of the Cordillera pantheon, very intriguing. 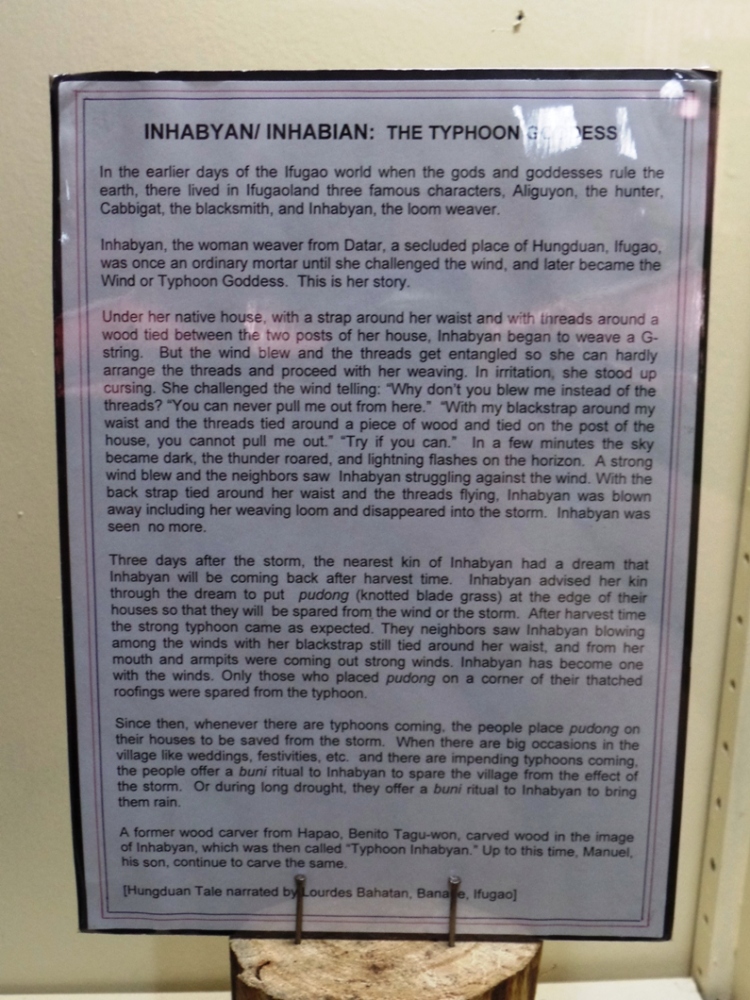 Entry was free but, as it is on the grounds of St Louis campus, I had to pass through security, leave my passport at the entrance and wear a visitor’s badge. It was quite interesting to see the inside of a Filipino university.

As far as tribal history goes, the museum at St Louis University definitely had the upper hand, but Baguio Museum was still a fairly good (and educational) way to burn an hour or two of time, and it was also home to a genuine Kabayan Mummy. 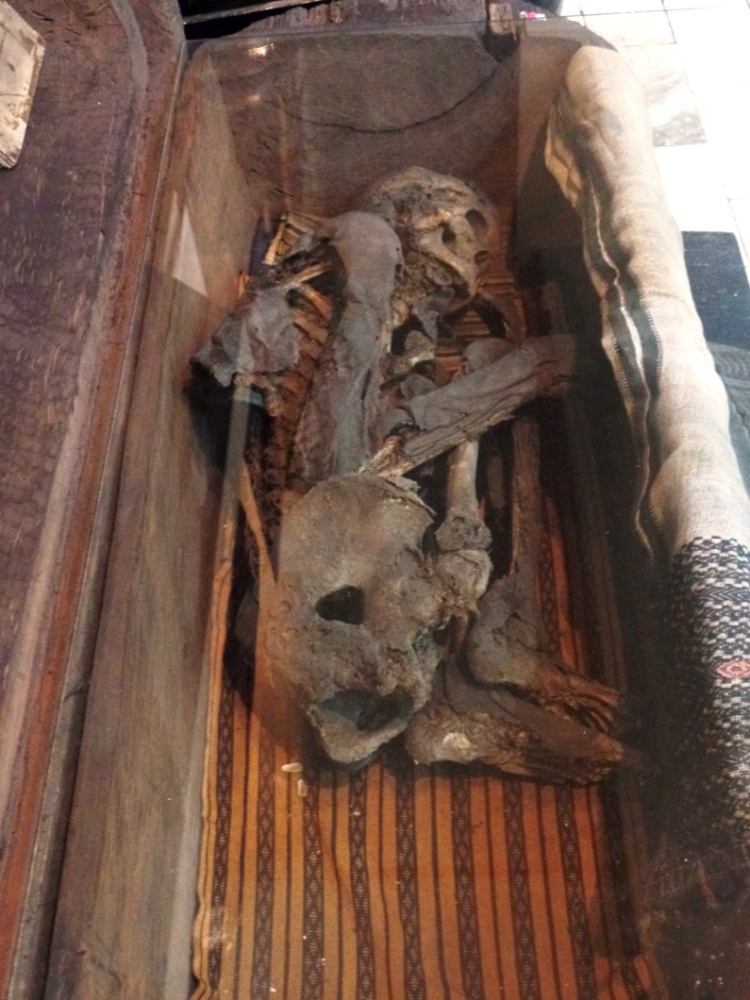 There was also an art gallery downstairs and, if any of you readers have a burning desire to see a portrait photo of every mayor Baguio has ever had, then the second floor of this museum is the place for you. I, admittedly, may have breezed past that particular section… 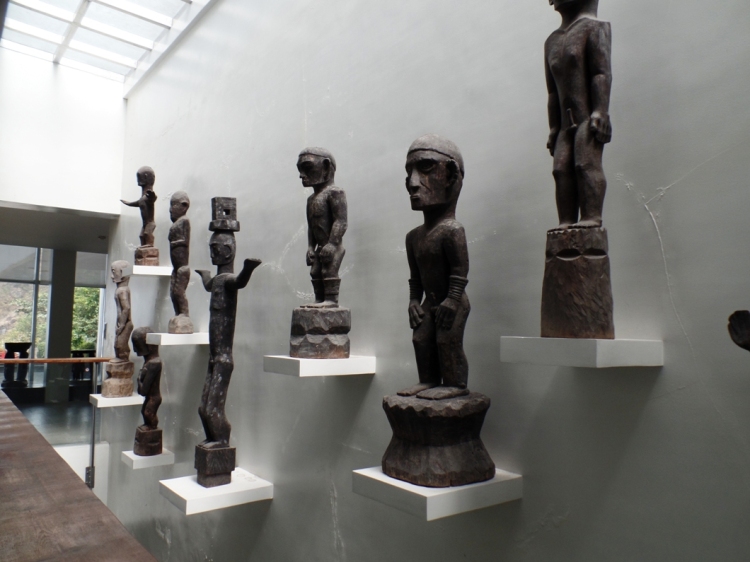 Possibly the highlight of Baguio for all four of us was this treasure. It was a little out of town so we had to catch a taxi, but it was definitely worth the trip. It was more of an art gallery than a museum, but a very good one, and it somehow managed to cover a whole range of traditional and modern styles while still keeping the tribal theme as a distinct nucleus. 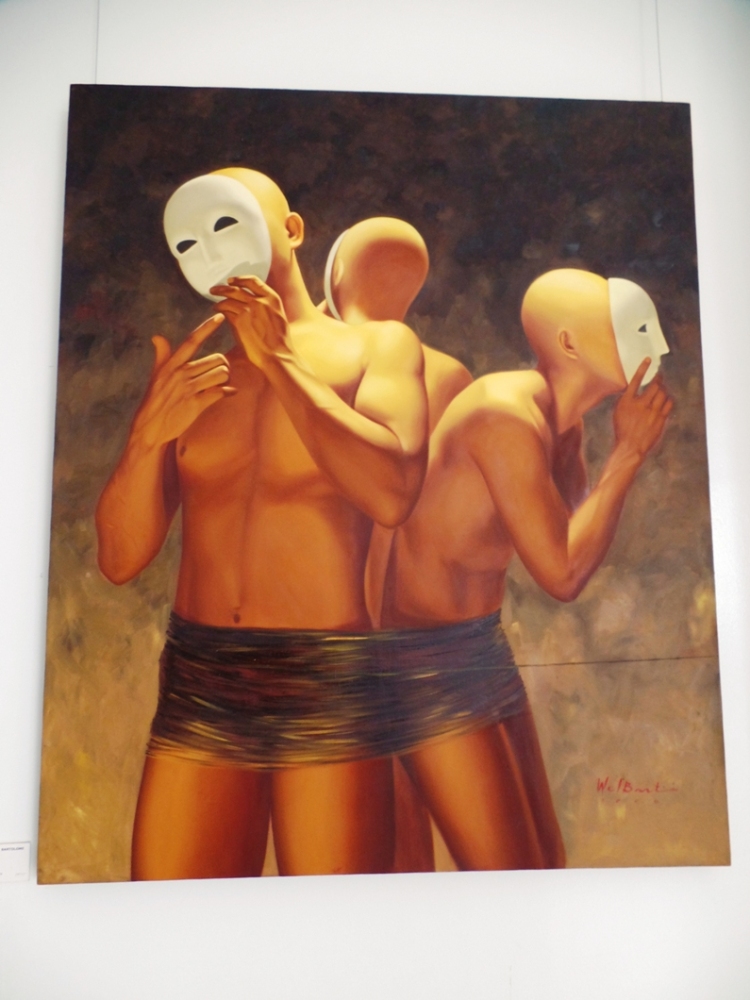 Baguio is a very arty place. Every museum there seems to have at least one room (or several) dedicated to displaying works made my local hands and minds. I found that the standard was generally very high, and much of it captured what I sensed was the essence of a tribal – and formally animist – identity caught in the throws of modern urbanisation and a Christian doctrine. 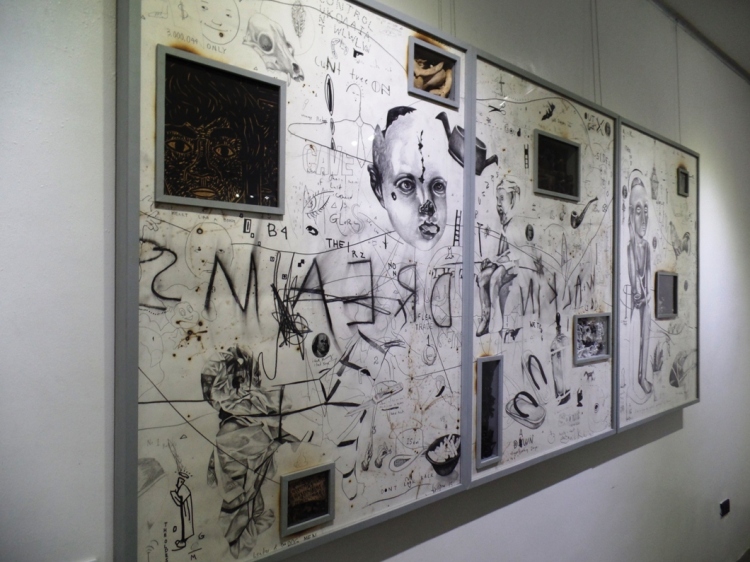 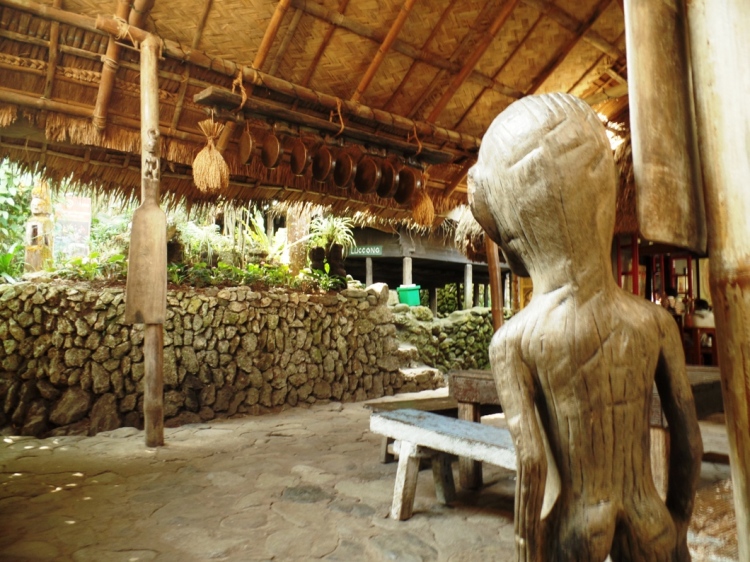 Tam-awan was okay, but not quite deserving of its status as one of the main attractions in Baguio. It was essentially a collection of remodelled tribal buildings scattered around a copse, with a few art galleries and new-agey things – such as dream-catchers, and tires painted in psychedelic colours – thrown into the mix. There is quite a nice atmosphere there, though. I would recommend it to future travellers if they have some time to burn. 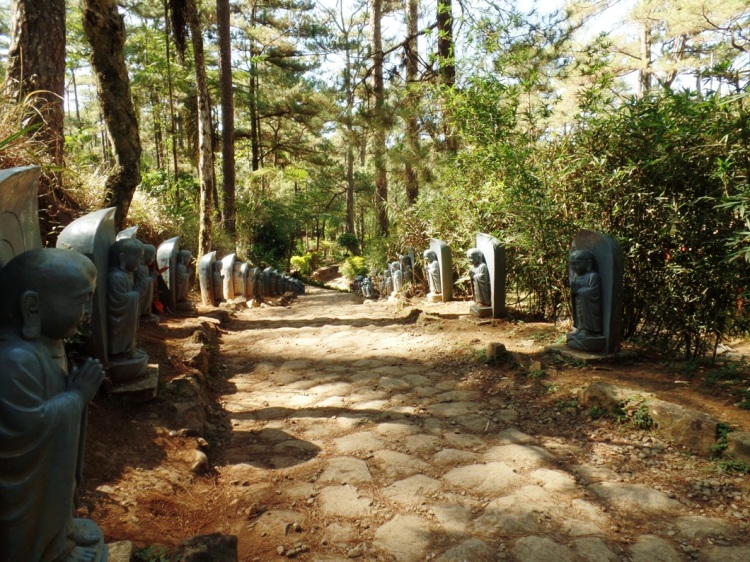 The Botanical Gardens were a little rough around the edges – if they had just cleaned up the few little parts of it which let it down it would have been great – but it was definitely an enjoyable place to wander around for an hour or so, and we couldn’t really complain when it was free. 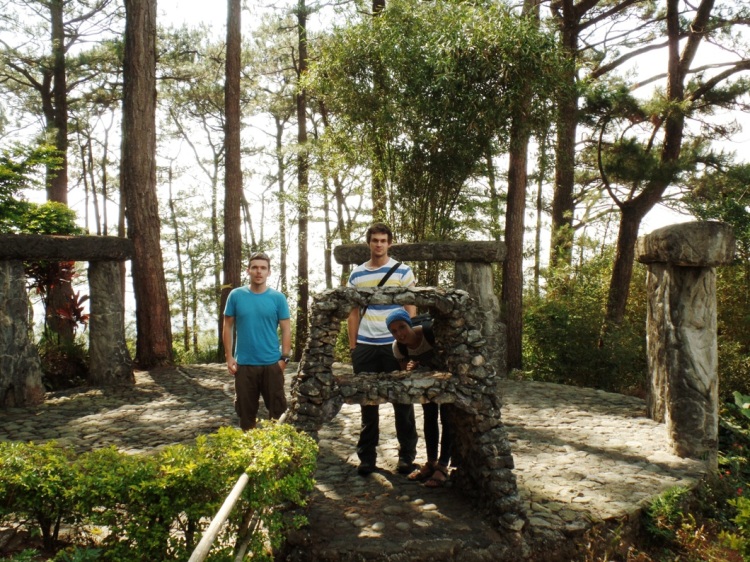 The ‘Cosmic Journey’ (which involved walking through a series of gardens giving a very brief history of the universe and life on our planet) was a bit cheesy, but the gardens themselves were very nice and the energy there was pleasant. The gift shop was stocked with lots of naturally made products, including soap and insect repellents, and there were a variety of interesting books about spiritual philosophy for sale. I ended up walking away with a copy of a book about the pre-Christian religious traditions of the tribes of the Cordillera – a subject I had become increasing intrigued by. 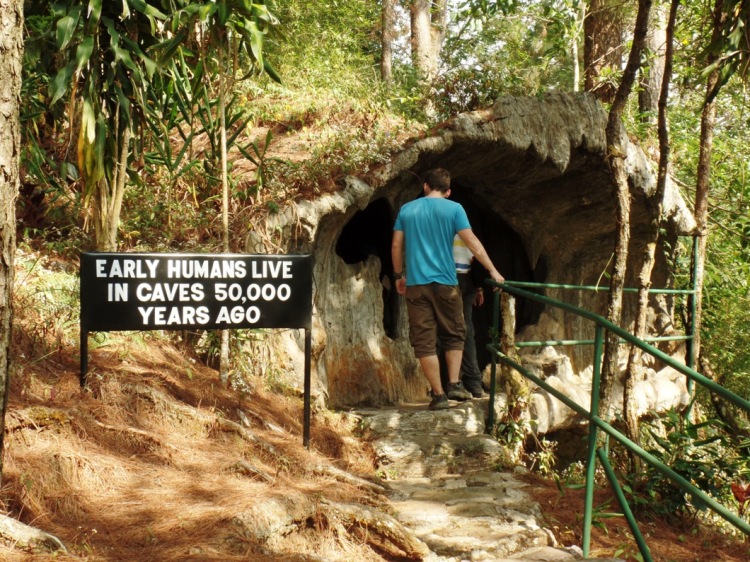 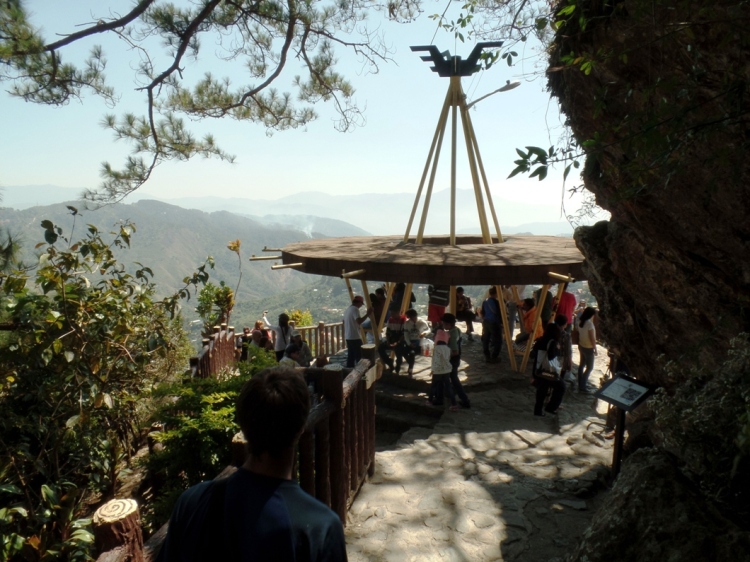 It was just a short jeepney ride away, and the four of us caught a great view of the mountains. 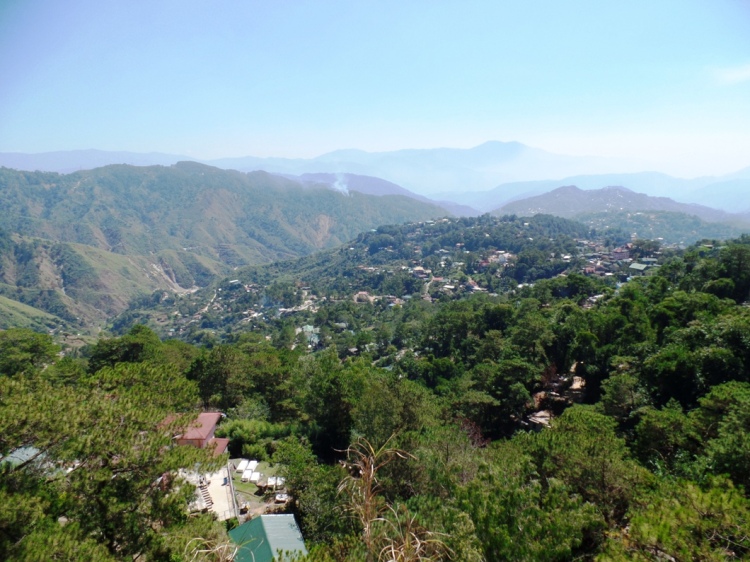 We did, however, have to walk past a tourist trap of street stalls selling various forms of tat on our way down.

Being vegetarian in Philippines has been very frustrating, at times – there have been occasions where I have wandered around towns for what felt like hours, trying to find something without meat in it – but Baguio was definitely an exception to that rule and there was a good variety of places for me and Pedro to eat. ‘Oh My Gulay’ is the restaurant which all the travel guides rave on about, but we actually found the food there a bit bland. There was a Taiwanese style vegetarian restaurant in the food court at SM Mall which was always good for a spot of lunch, and on the final day in the area we discovered a place called ‘Health 100’, which just so happened to be opposite the road from Baguio Village Inn (the guest house most backpackers end up staying at).

On the morning before we left, we went to Health 100 to eat breakfast and just as we were waiting for our food, the table suddenly began to shake and the floor rumbled. It didn’t last for very long, and I was a bit unsure what was going on at first, but, when I saw the panic-stricken café workers running towards the doorway, I realised that I had just experienced my first earthquake.

Its epicentre was 13 kilometres away from the city, and it was a magnitude of 4.1. Nobody was hurt, so I am actually glad it happened because it was quite an exciting experience.

One thought on “Travelblog#46: Baguio – the Philippines”