Not many people seem to go to Sibuyan. And this came as a great surprise to me because when I first started reading the Lonely Planet guide for the Philippines, all those months ago, it was one of the places which I circled very thickly with a pen as somewhere I just simply had to visit.

And there is one particular reason for this: during the last ice-age – when many of the other islands of Asia were joined up by land-bridges – Sibuyan remained cut off from the rest of the world. It has a very unique eco-system, and is thought by many researchers and scientists to have more bio-diversity than any other small island in South East Asia.

We arrived at Magdiwang port in late morning and went straight to Sanctuary Garden; a guest house which is surrounded by great scenery and known for being a good place for travellers to base themselves while they arrange excursions around the island. Not wanting to waste any time, we dropped off our bags and hailed down a tricycle driver, asking him if he could whisk us around a few sights that day. Our first destination was Cataja Waterfall. 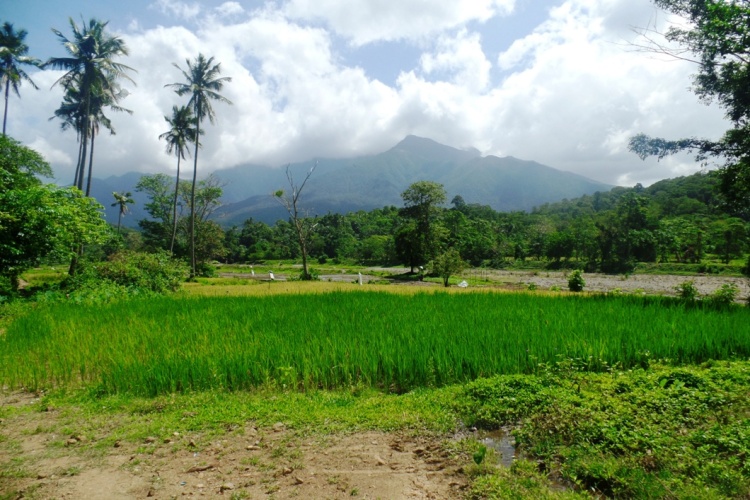 After a bumpy ride down a dirt-track road, our driver dropped us off by the beginning of a footpath and told us we needed to walk from there. We followed the path for a while and, after crossing a stream, got a little confused over which direction we were supposed to take from there, but an elderly lady who was tending to her farm very helpfully pointed us in the right direction. 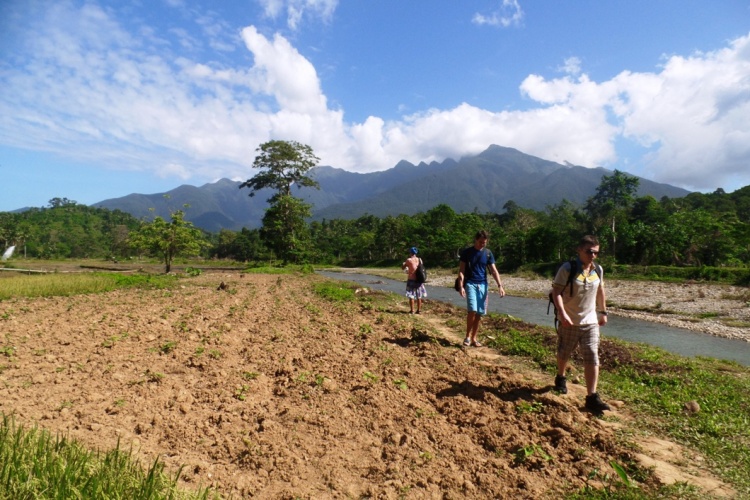 The walk to the waterfall took about half an hour, but we did it at a leisurely pace and passed through an eye-catching terrain of rice paddy fields and farmhouses before we entered the woodland and followed the riverbank upstream, eventually reaching the falls.

Cataja was definitely one of the better waterfalls I have seen in the Philippines. It had three tiers, and the pool at the bottom was crystal clear and great for swimming. We spent over an hour there. 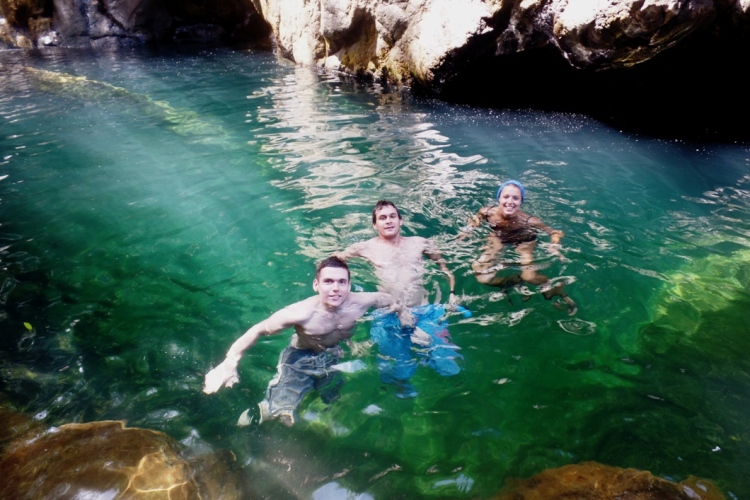 Later that afternoon we went to Lambingan Waterfall which had an entry fee of 100 pesos per person and was, to be honest, a little underwhelming. We took a quick plunge, strolled around the place for a while, and then decided we had seen enough and returned to our guest house.

When we got back to Sanctuary Garden we discovered that there was a very scenic brook nearby, and we simply couldn’t resist stripping back down to our swim-wear and taking one last dip to finish the day off.

That evening one of the guides from the Protected Areas Office came to talk to us about embarking upon a trek up Mount Guiting-Guiting; Sibuyan’s highest summit.

We rose bright and early and, after gobbling down a quick breakfast, jumped onto a pair of motorcycles, and began driving around the island’s coastal road.

The road was pretty poor at times so we were forced to drive slowly – the people of this island haven’t quite discovered crash helmets yet, and at one point we passed by a collapsed bridge which had been haphazardly ‘repaired’ – but the scenery was great. Sibuyan is definitely not the sort of island you should go to if you want to soak up the sun upon a sandy beach paradise (you would be much better venturing to nearby Romblon for that sort of thing), as most of the coastline is rocky, but the interior landscape of rice paddies, farms, simple villages, and the ever-present sight of Mount Guiting-Guiting looming in the background, make it a very picturesque place.

When we had finished our motorcycle tour we spent the rest of the afternoon making preparations for our climb up Mount Guiting-Guiting. We visited the Protected Areas Office, where we had to fill in some forms, be briefed on the climb, watch a video, and secure our permits. There were lots of scientists (both local and western) working there, researching the island’s abundant species of flora and fauna.

After that, we went to Magdiwang’s market area to buy food. This was different to any other trek that I had ever undertaken in Asia: usually the guide or agency you book the trek with sort out the food, and they even cook it for you, but, on this climb, we were going to have to organise all of those things ourselves. Our guide – Toto – would be providing most of the equipment and, of course, guiding us, but that was mostly it.

Toto turned up early in the morning with our porter Junie and, after filling up Junie’s backpack with our provisions, we set off towards the mountain. 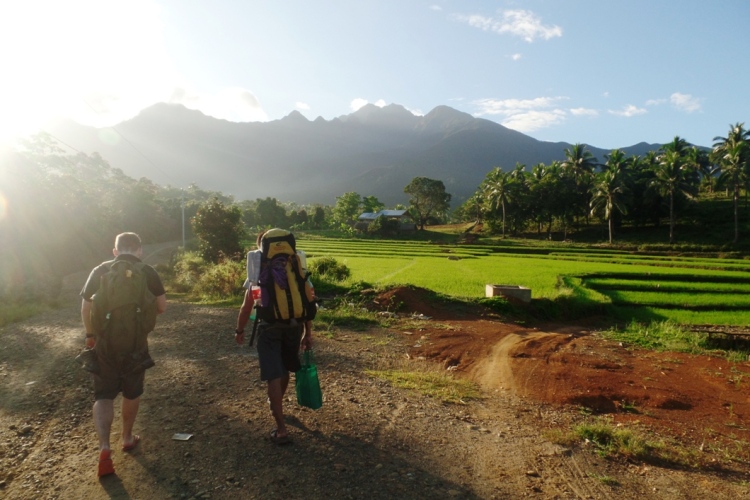 It wasn’t even an hour into the expedition that we had our first incident; a territorial bull charged at Pedro just after we passed a village. James, Chloe, Junie and myself were several yards behind them at the time, so all we heard was a bellow followed by something large stamping its way through the foliage ahead of us, and then Toto shouting. We were forced to quietly back away and find another way around, unsure – and a little worried – about what happened to Pedro, because we couldn’t communicate and any loud sound could have caused the bull to become aggressive again.

We caught up with Toto and Pedro on the other side of a river a few minutes later and were relieved to see that Pedro was fine; the bull had torn two massive holes into his shorts, so it would appear that he had a very lucky escape. 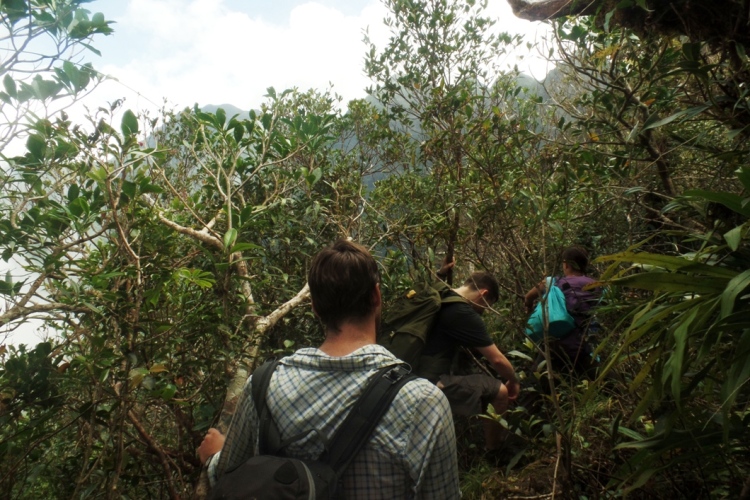 Shortly after that, we entered the jungle and began making our way up the mountain. The trail was very steep throughout, and it was hard and sweaty work. After about four hours or so, we started to be rewarded for our efforts with great views of the surrounding mountains between the gaps of the trees. 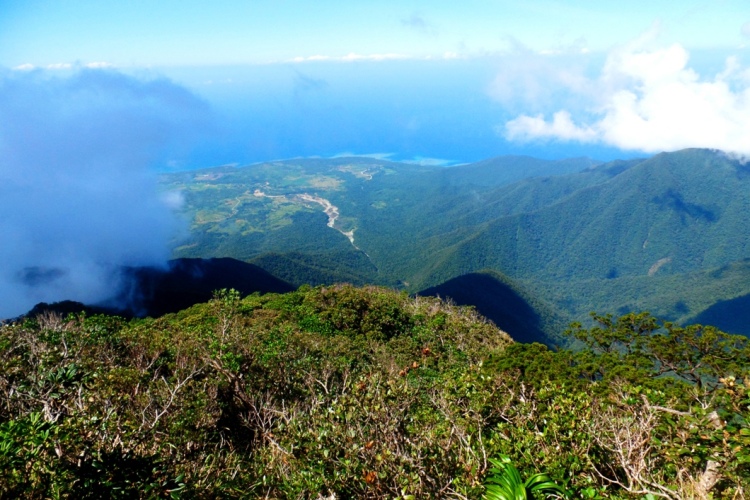 After seven hours of trekking we finally arrived at a sight known as ‘Camp 4’. It was a patch of mossy forest near one of the peaks, and at night one could hear lots of rats scurrying around. Civet cats were apparently frequently on the prowl too, but we never saw one. James and I cooked a vegetable curry for dinner, and we settled down early that night, anticipating a hard day ahead.

Rising early and eating a breakfast of porridge, we made our way over to what is known as ‘The Knife-edge”.

Progress was slow. We are all quite experienced trekkers, and were prepared for the idea that it was going to be tough, but we were soon to discover that what we had just entered was more of a climb than a hike. 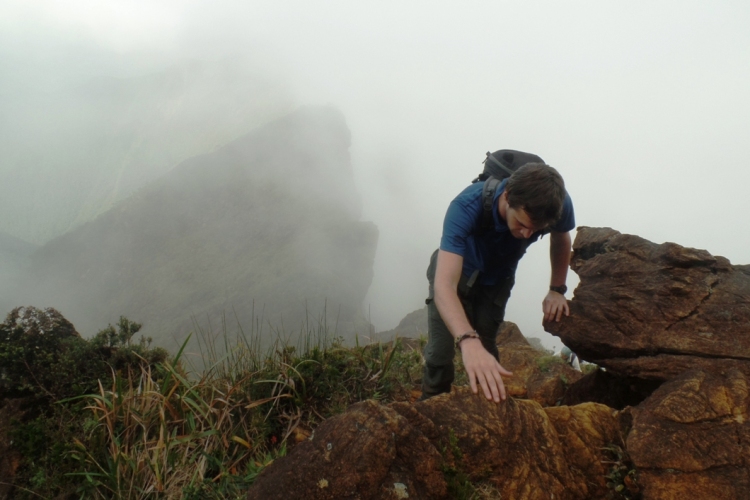 The views – despite the vertigo they often caused us – were fantastic though.

Unfortunately, we never made it to the very top of Mount Guiting-Guiting because we were simply just not experienced enough, and this was an advanced form of mountaineering that none of us had previously had any experience in before. Toto eventually told us that we had not made it far enough by lunchtime, so we were going to have to turn back, to make sure we got back to camp before it got dark.

I don’t have any regrets; it was still a very interesting and challenging day for all of us and we saw lots of amazing sights. It also became cloudy later the in the afternoon, which gave the setting of our clambering an eerie feel, but also meant that we wouldn’t have seen much from up the top of that summit anyway.

We made our way back down to camp and cooked dinner again before retiring to our tents. The following morning we packed up and began to make our decent. Rain poured down, all day, flooding the trail, until we were soaked, but we made it back to Sanctuary Garden just after lunch time.

To read the other parts of my time in the Visayas, click on the following links: Part 1 (Bohol & Siquijor), Part 2 (Apo Island, Dumaguette & Boracay), Part 3 (Tablas & Romblon).