Mandalay was a bit “meh”, but we had suspected as much. We had already decided that it was a place we were just going to pass through so as soon as we arrived there we went straight to the jetty and booked a boat heading upriver for the following morning.

This still left us with an afternoon to entertain ourselves in Mandalay. So, what did we do?

We caught a bus out of Mandalay. To a town just outside of it called Amarapura, so we could see the famous U Bein bridge. 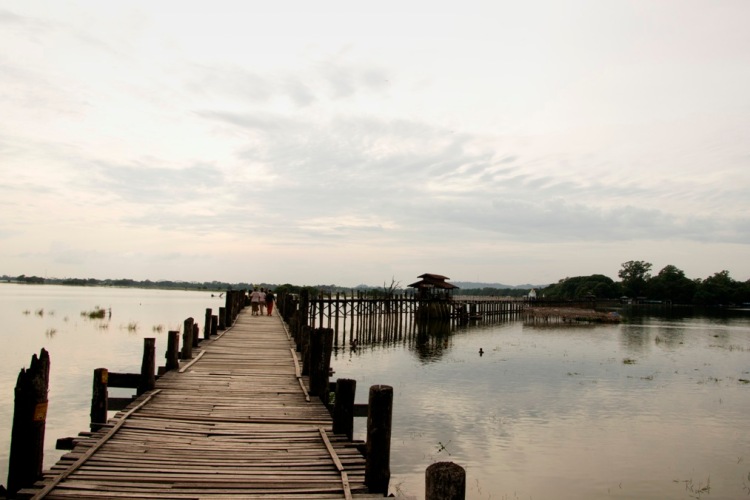 At 1.2 kilometres long, it is the longest teak bridge in the world. I happened to notice though that a section in the middle of it is actually made from concrete, which I think is technically cheating. It was nice to sit there for a while and watch local life at Taungthaman lake roll by, with the fishermen out on the water and children playing.

The next morning we got up at 5 am and boarded the boat to Katha. It was quite an enjoyable journey, at first. The wooden seats were a bit crammed and uncomfortable, but the scenery around the Irrawaddy river was pleasant.

We were expecting the boat to be a bit late – we were in Burma, after all – so, when the woman who sold us the tickets told us we would arrive in Katha by 9pm, we took it with a pinch of salt. We thought that it probably meant we would be there by around 10pm, or maybe even 11 or 12.

We were not at all prepared for the idea that we wouldn’t be arriving into Katha until 5am the next morning. And by that point we were very tired.

Weary, frustrated, and sore from the hard seats we had just spent 24 hours sat upon, we were feeling a bit fed up by the time we found a guest house and crashed into our beds. We slept for a few hours, washed, and then began to explore Katha later that morning. It was quite a nice place, and we ended up staying there for two days.

There wasn’t anything incredible to see in Katha; it was just quiet river town at the end of the day. But it was a nice place to kick back and relax for a while, and the locals were all very welcoming and friendly. The entire time we were there there was no electricity. When we asked how long this power cut had been going on for they would just shrug and say; “Five days? I think….” and you could tell from the way they said it so nonchalantly that it this was a regular occurrence for them.

When we were beginning to think about moving on we noticed that there was a ticket booth by the side of the river, selling seats for boat running back downstream to Mandalay.

“Why is it so expensive?” we asked when they told us the price. It was the same amount we paid two days ago for the hideous journey we took upstream, and we knew by then that it was a complete rip-off.

“It’s an Express boat,” they said. “It only takes sixteen hours.”

That is exactly what they said to us two days ago… and there was no way we were going to fall for that trick again.

So instead we caught the sleeper bus. It was half the price, took half the time, and turned out to be a bit of an adventure in itself. 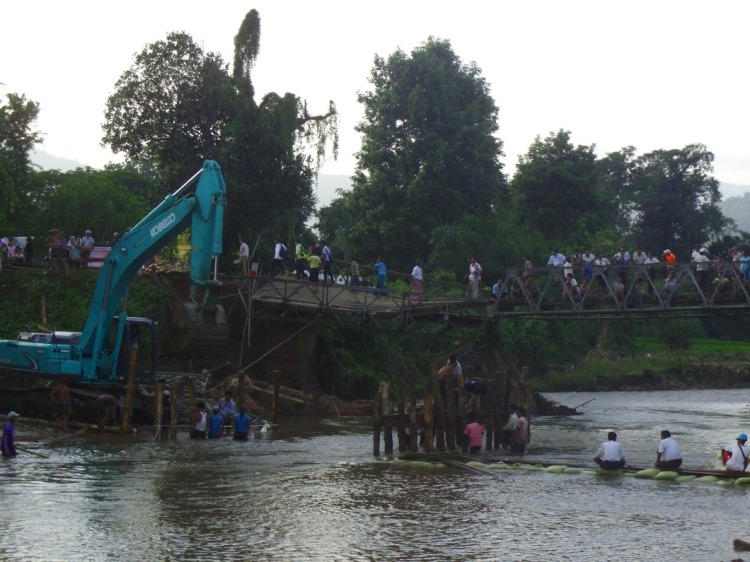 Half an hour after leaving Katha the bus reached this little obstacle, and all passengers were asked to exit the vehicle so that they could cross the bridge by foot.

Thinking that there was obviously going to be a new bus waiting for us on the other side, I began to pack away my things, but, by the time I had finished filling my bag I realised that I was the only one still on the bus. Apart from the driver who had started up the engine again.

“Wait!” I said, rushing down the aisle.

The driver turned, and his eyes widened when he realised that there was someone still on the bus. After a moment of consideration, he then shrugged, gestured for me to sit back down, and carried on driving.

A little confused, I did as he requested.

He then began to drive towards the river.

No… He’s not… I thought, as he steered the bus down the bank. He can’t possibly be…

Meanwhile… Roy was outside, on the bridge. He was a little confused as to how I managed get away with staying on the bus during this manoeuvre. Apparently, when he saw what the bus was about to attempt (with me on it, no less) he was a little bit concerned, but this didn’t stop him taking lots of photos. 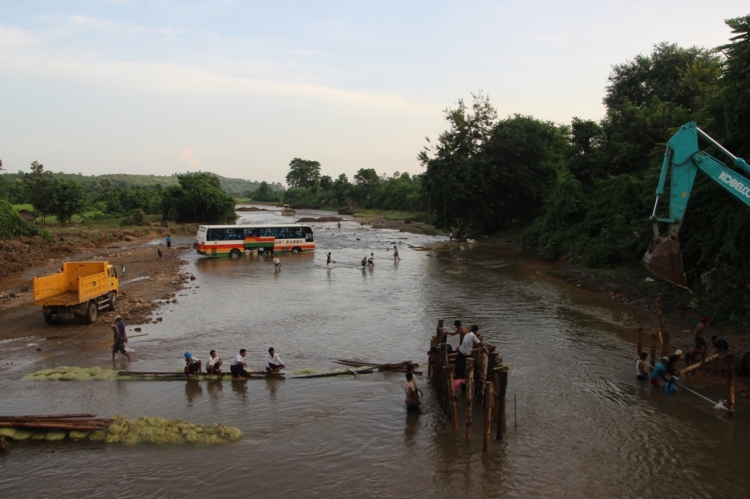 We spent the next day in Mandalay again while we were waited for another bus to take us down to Yangon. We visited many of the main sites this time, including Mahamuni Paya and Mandalay Hill. Both were nice, but I have seen grander temples and holier mountains with much more stunning views, in other parts of Burma. I left Mandalay that evening, still not quite understanding why it is one of the countries’ main tourist attractions– apart from that it is, maybe, just a convenient enough location for travel agents to throw it into package tours.

That night on the sleeper bus, I began to feel a bit ill and I thought I had a bit of a temperature, but I told myself it was probably just tiredness. Roy and I had travelled over 800 miles in the space of four days, after all, and most of it had been overnight.

The next morning, shortly after we checked into a guesthouse in Yangon, I was aching all over and I began to feel feverish. I realised then that I really was ill.

I went to reception and asked to upgrade to a room with a double bed and air conditioning, and they were very helpful and understanding. They even, in my weakened state, helped me move my things.

I spent most of that day in bed, but I couldn’t sleep. Every time I closed my eyes I was getting those weird dreams you get when your feverish. Eventually, Roy returned with some food, medicine, and a thermometer. I took my temperature and it was 39 degrees, which was slightly worrying but nothing to panic about. I had already looked up the symptoms for malaria and dengue, and I didn’t have enough of the signs for either of them to cause immediate concern. I was also coughing and sneezing a lot which was more of an indication that I had the flu.

I made a resolution though: if I began to get cold sweats, pain behind my eyes, or my temperature went up to 40, I would go straight to the hospital.

Luckily none of those ever happened. I must have somehow got to sleep eventually, as well, because I woke up the following morning at 4am, feeling better. I took my temperature again; 38.

I managed to make it out of the hotel to eat breakfast and dinner that day, but I was still too weak to venture out too far. It wasn’t until my third day there that I finally got to see some of Yangon, and that was our last day in Burma.

We caught the circular train, which took us on a rickey and bumpy ride around the city. We got off three hours later on the eastern side and took a little walk around Kandawgyi Lake before we went to see Chaukhtatgyi Temple, which was home to one of the more charming large Buddha statues that had seen of late. 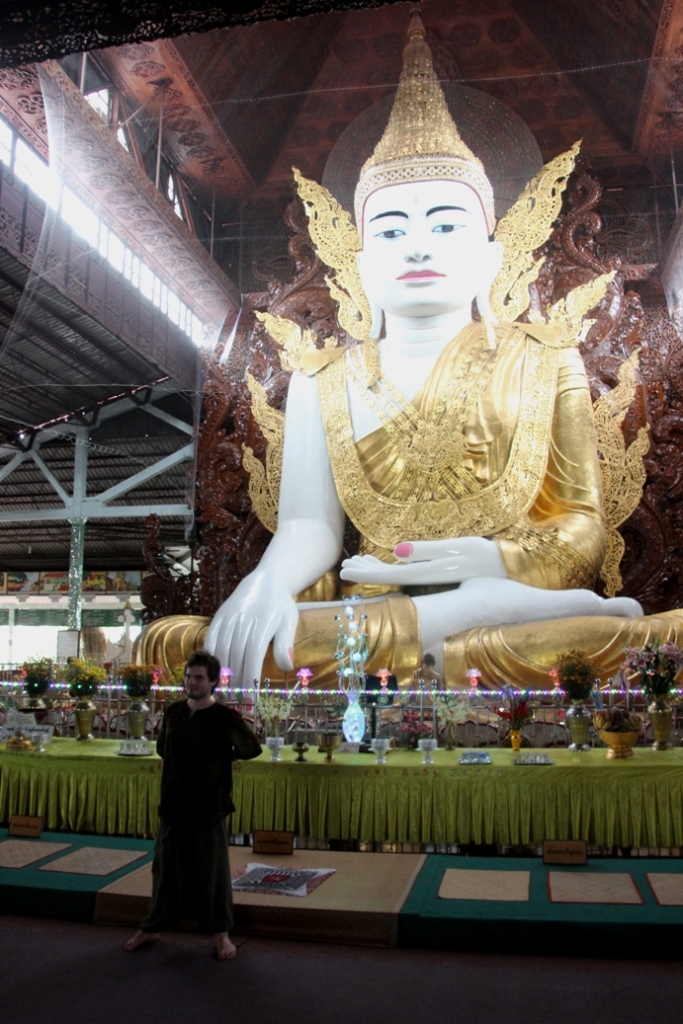 We then tried to get in Shwedagon Paya, but we found out that the Government had hiked the foreigner entrance fee up to $8 and we thought that was a bit in bad taste, as it is supposed to be a religious site, so, we walked around it and searched for way to sneak in. We managed to slip in through one of the side entrances, but the ticket Nazis eventually found us and we were escorted from the premises.

So, we went back to downtown Yangon and ate an Indian thali, and when we were suitably stuffed we began to make our way back to our hotel.

I saw a white guy walking down the street.

I held up our (rather battered) copy of Lonely Planet Burma. “It’s a bit old,” I added. “But we’re flying off tomorrow and we don’t need it anymore. You can have it if you want.”

“Yeah. Sure,” he said, smiling as he accepted it. “Where you guys going, anyway?”