Before I speak of my time in Mendoza I would like to mention the journey there as the road which crosses into Argentina from Santiago is not one to be forgotten and certainly one to be passed in the daytime. I usually take long distances at night when I can to save time and money but this was an occasion I went for the more scenic option. 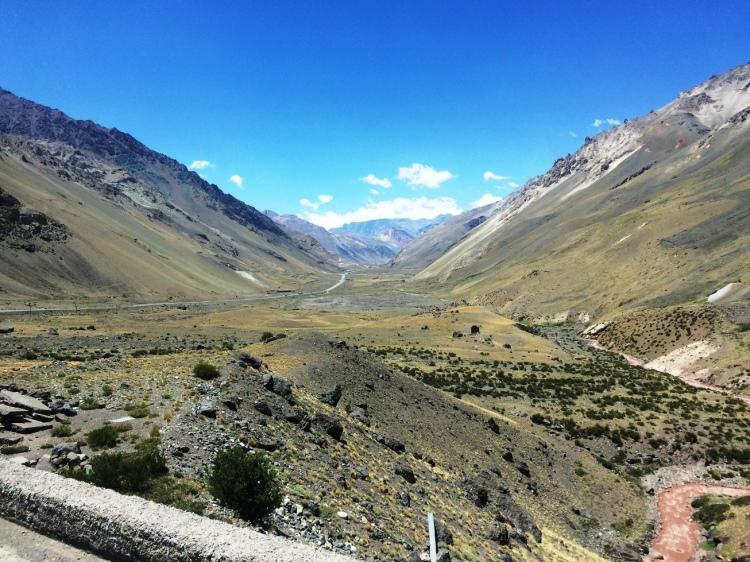 It climbs up into the Andes, through an incredible landscape of barren valleys and ice-capped mountains. The road is truly a marvel and I have uploaded some videos from it which can be viewed here. 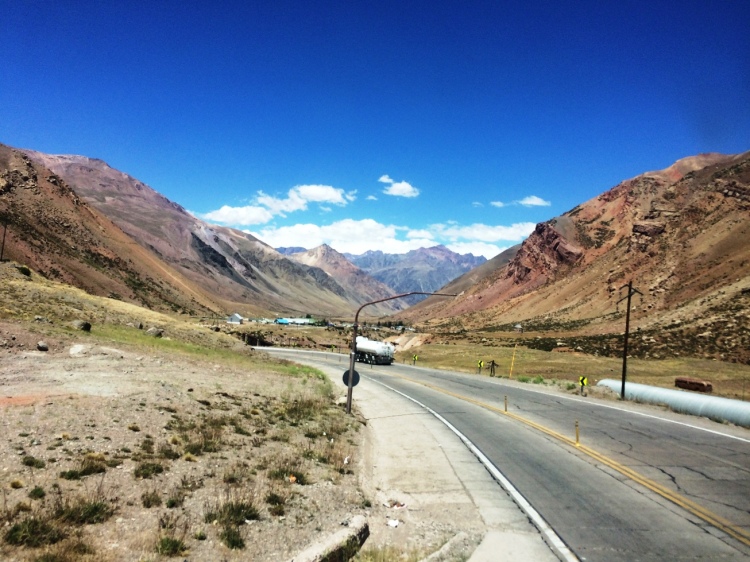 I stayed at Hostel Estacion during my time at Mendoza. It was a homey place and the staff were helpful. It also, most blessedly, had a pool to swimming pool which gave periods of relief during the sweltering days where the temperature fluctuated between 32 to 38 Celsius. I spent much of my afternoons and evenings in Mendoza drinking Malbec (their signature wine) and chilling out in the garden between taking occasional dips in the pool. 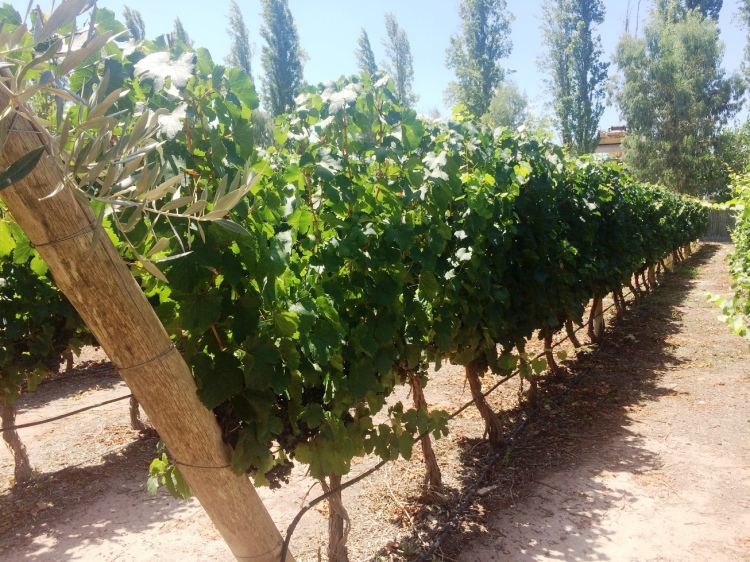 There was hardly ever a cloud in the sky. Mendoza receives very little rainfall. It was originally a dessert until a series of irrigation channels were created to channel water from the nearby mountains. Constant sunshine, warm temperatures, lack of clouds, and the introduction of flowing water created the ideal conditions for the production of grapes, and many of Argentina’s population are of Italian descent. Thus, it became one of the biggest vineyards in the world. 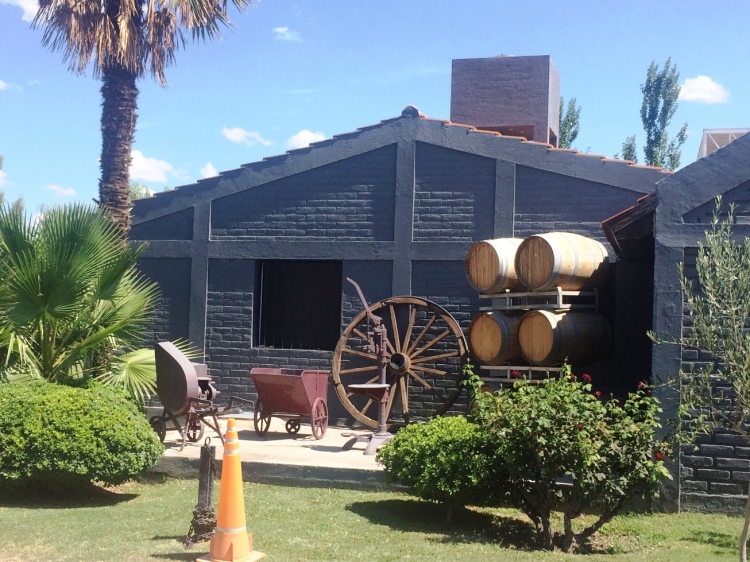 Mendoza is a sleepy town, particularly during the afternoons when all the shops close and everyone retreats into their houses for siestas. I wandered around during a Sunday and found that the busiest places were the church – where mass was being held – and San Martin Park, where people had come to lounge upon the grass, ride their bicycles, and there was even a rowing club practising in the lake. 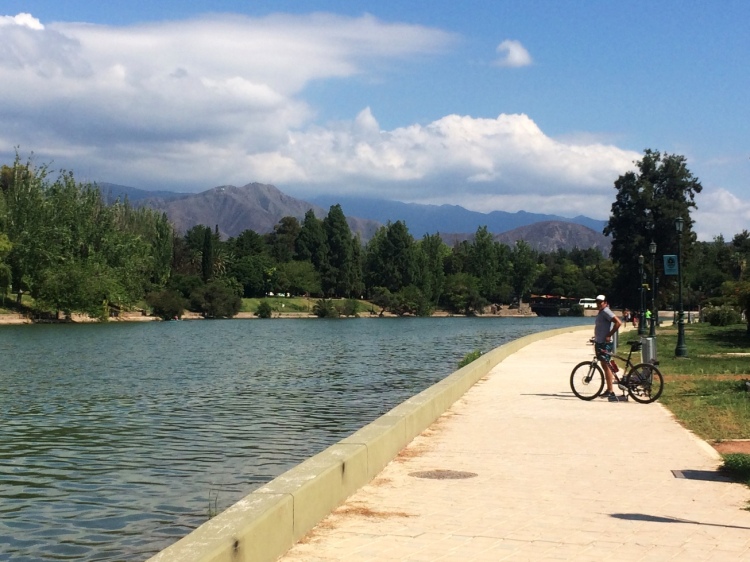 A visit to Mendoza is simply not complete without going on a tour to see some of the vineyards though, which is what I did on my final day. 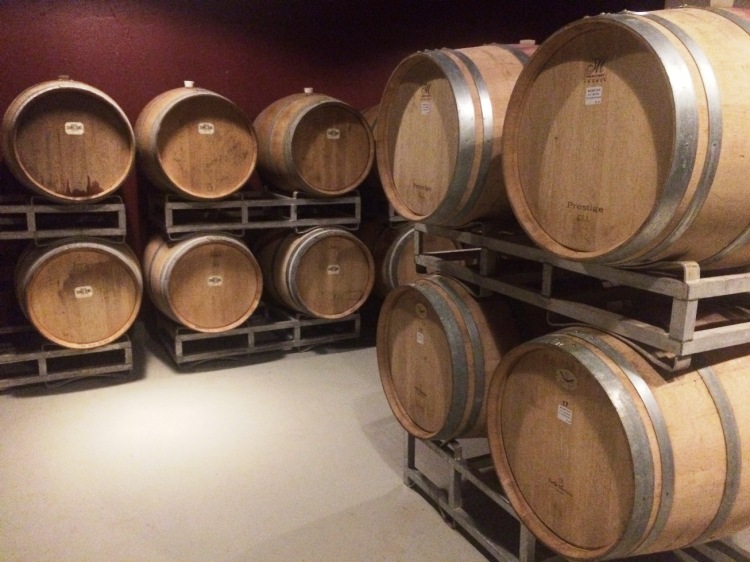 I originally had a romantic notion in my head that I would this independently – as it is very possible to hire a bicycle, buy a map, and tour vineyards off your own steam – but the reality was that it was just so unbearably hot I questioned how much I would enjoy it. The hostel I was staying at recommended a reasonably-priced tour on an air-conditioned bus and perhaps, being eight months into my trip now, I was beginning to feel a little lazy. I didn’t regret my choice, as I had a wonderful afternoon. We were taken to three vineyards, in all, and each gave us a little tour of their grounds where they explained some of the wine-making processes until we got to the best part, the tasting. 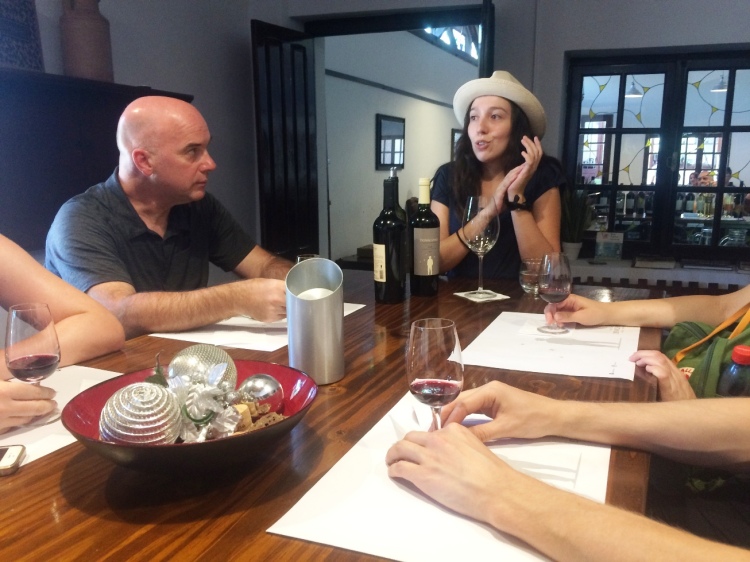 We were also taken to an olive oil factory, where I ended up buying some things from their range of dried vegetables and pastes. Unfortunately, I couldn’t buy any wine – as much as I would have liked to – because the following morning I was flying to Iguazú. 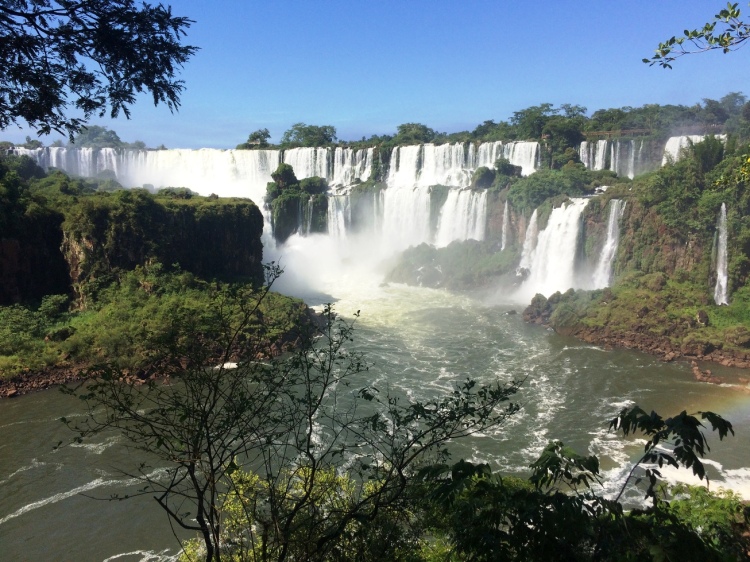 I didn’t arrive in time to see the falls the first day so instead, I went to Güira Oga, an animal refuge. It runs on similar principles as AmaZOOnico in Ecuador – which I went to several months ago – treading a healthy balance between being a zoo and rehabilitation centre. Entry fees go towards the care and rehabilitation of animals and the guests are only exposed to the animals which have no chance of being released (or are being kept as mating pairs to help repopulate numbers in the wild) during their tours. I saw lots of birds and also some mammals, including monkeys, wildcats, deer and otters. 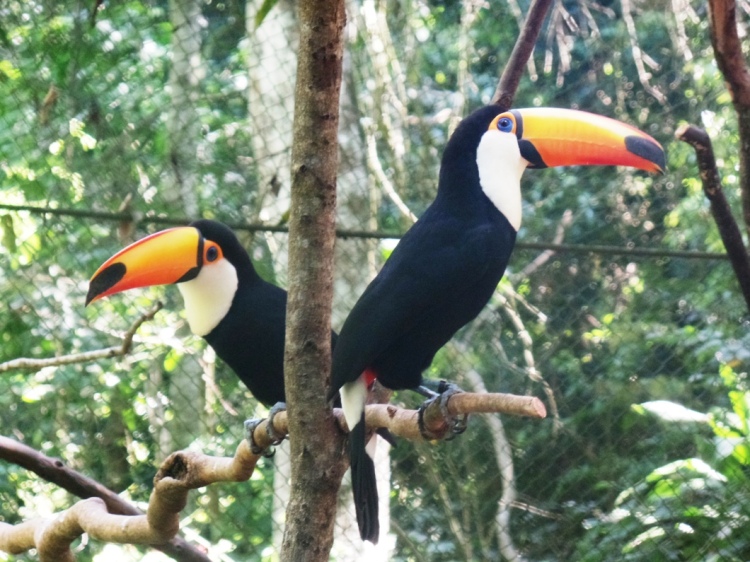 They had recently released a pair of howler monkeys who have since had a baby and still linger around the grounds while they are being weaned off the dependency of humans to provide them food. I saw them and have a video of it here. 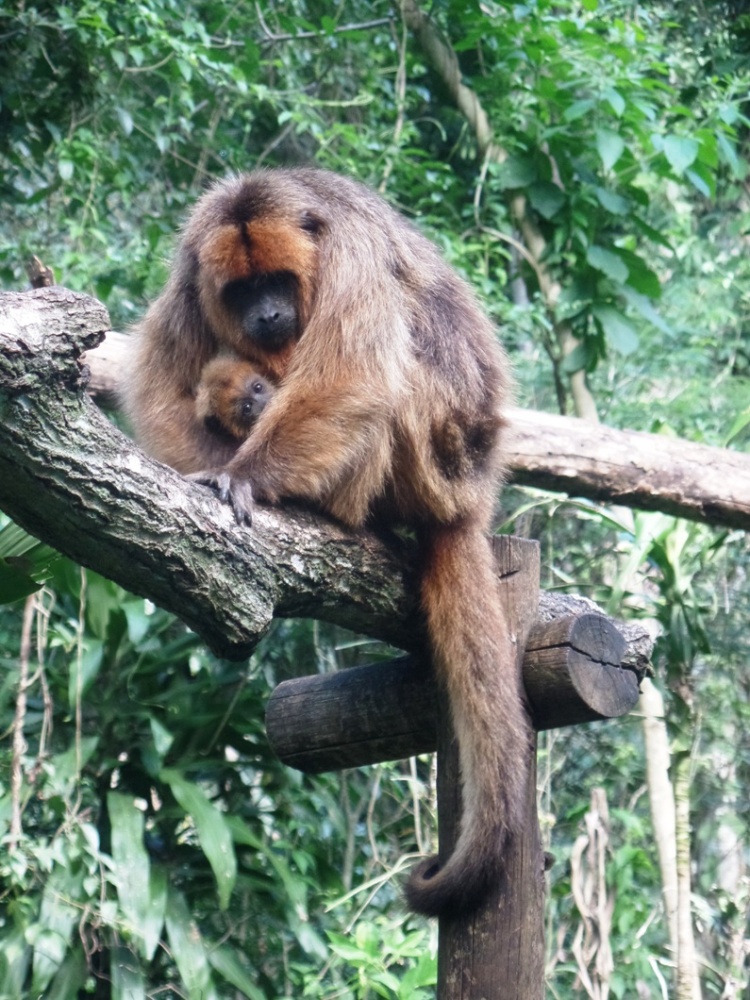 I went straight to the falls first thing the next morning. 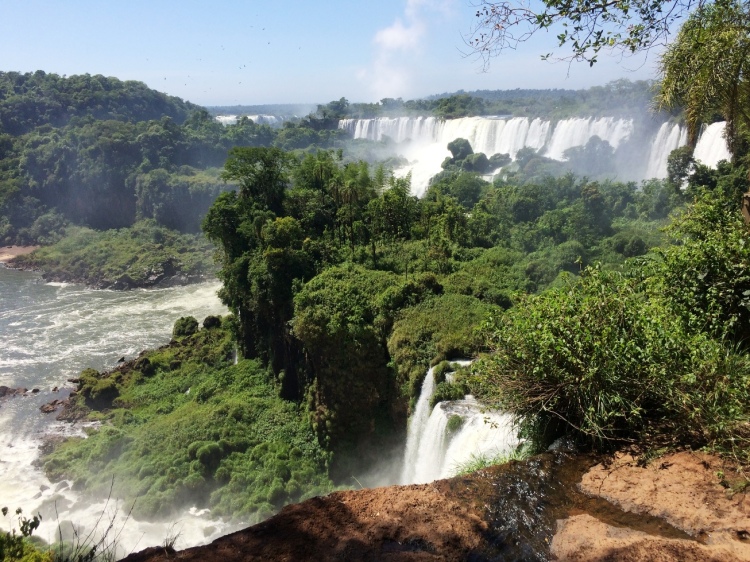 That day, I went to view them from the Argentinean side. There was almost a full day’s worth of walkways one could view the cascades from. The first, ‘Paseo Inferior’, is along the bottom. 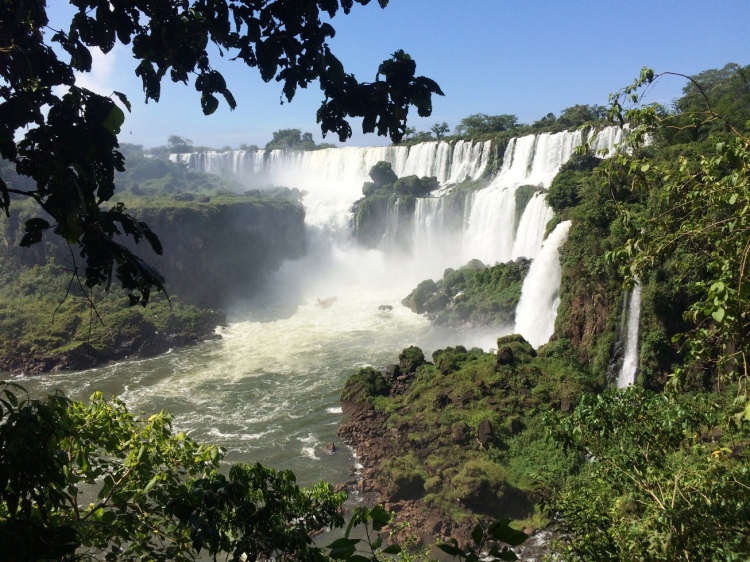 The second trail, ‘Paseo Superior’, goes along the top. 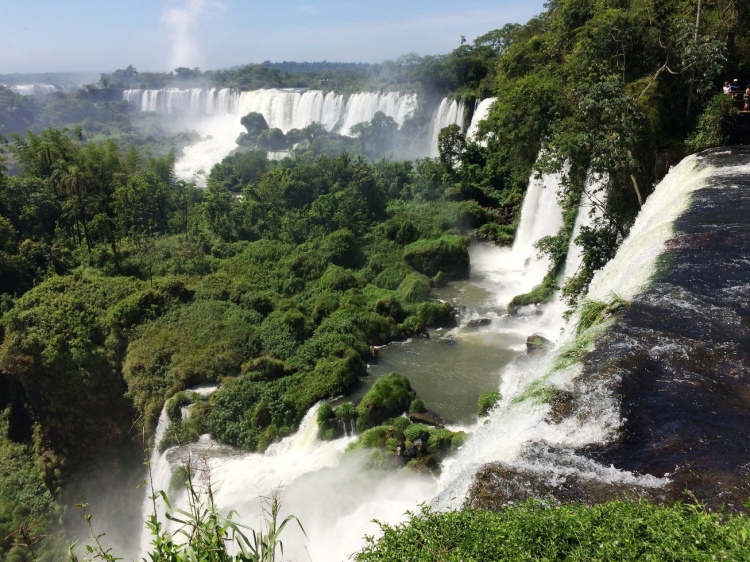 And there was also a third trail where you can walk along a series of boardwalks further up the bank to reach Garganta del Diablo, where another section of the falls plunges into the river. I have videos here. 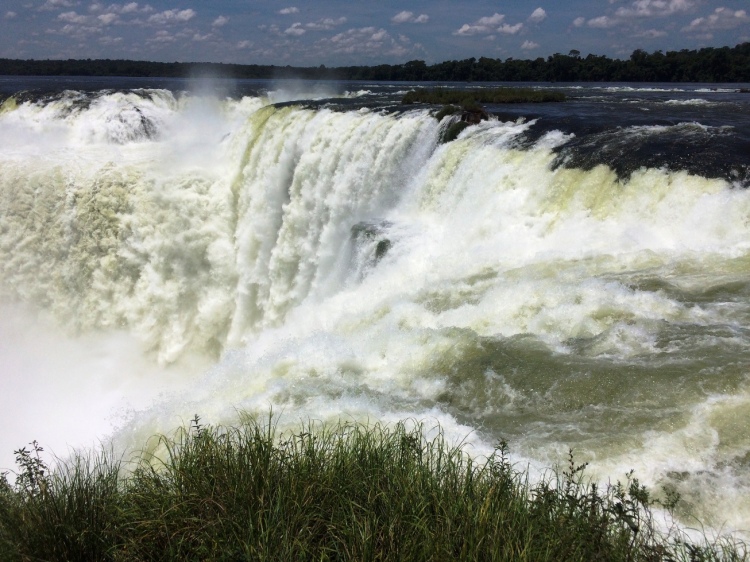 I also have a collection of other videos from the Argentinean side, which can be viewed by clicking here. 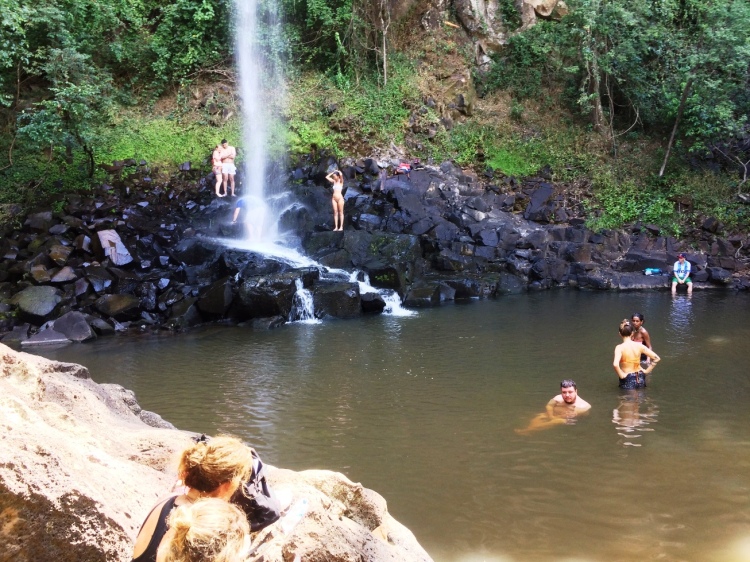 There was also another trail to Arrechea Falls. They were not as spectacular but it was a pleasant walk through the jungle and the pool at the bottom was suitable for swimming which was a refreshing relief considering the sweltering heat. 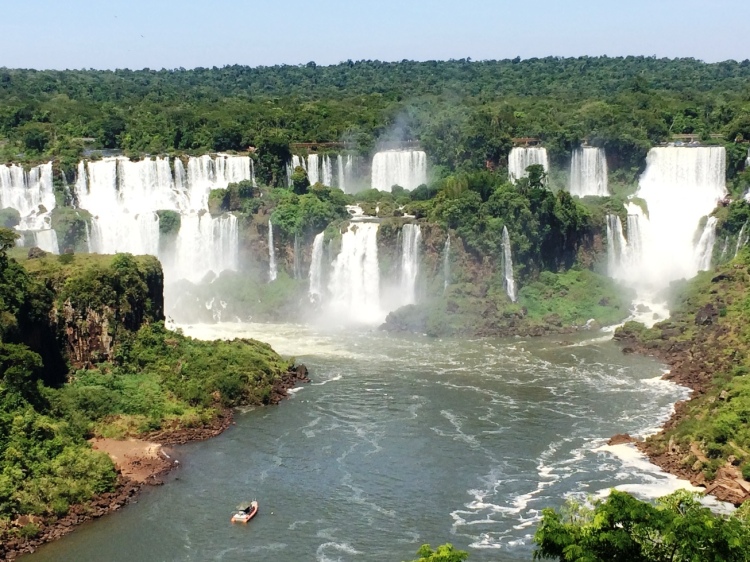 Being back in tropical regions – after months spent of Patagonia and the Andes – brought me back to the first few months of my travels which were spent in Ecuador and Peru. It wasn’t just the heat and flora that made me reminisce. It was also all the animals saw in the Iguazú National Park that day and the visit I’d made the previous afternoon to the rescue centre. They renewed within my mind similar issues which these wild places visited by humans face. There are problems at Iguazú with the coatis and some of the monkeys too. They were perhaps originally encouraged by visitors feeding them, thinking it was cute, but now the animals have come to associate humans with food and are a nuisance. This is bad for them because many have probably forgotten how to obtain all their food from the wild now. One of them stole my lunch and for a few moments, we were caught in a wrestle before it tore away half of my bread roll. 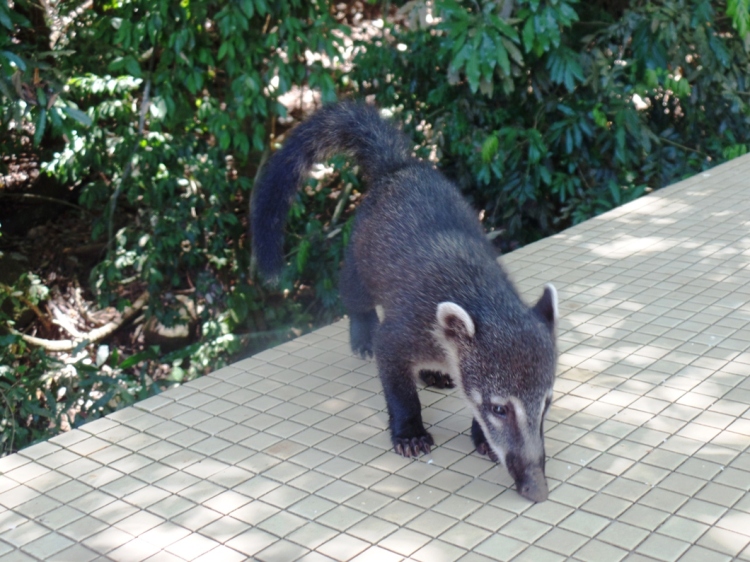 I caught a bus over the border the following day to see the falls from the Brazilian side. 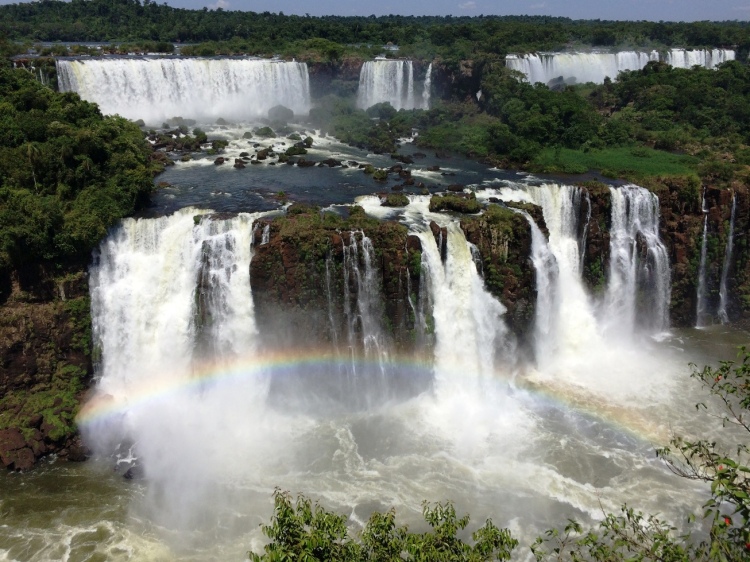 It wasn’t quite as jaw-dropping as the Argentinean side, but still – the bar being as high as it is for this incredible place – it was well worth the trip. 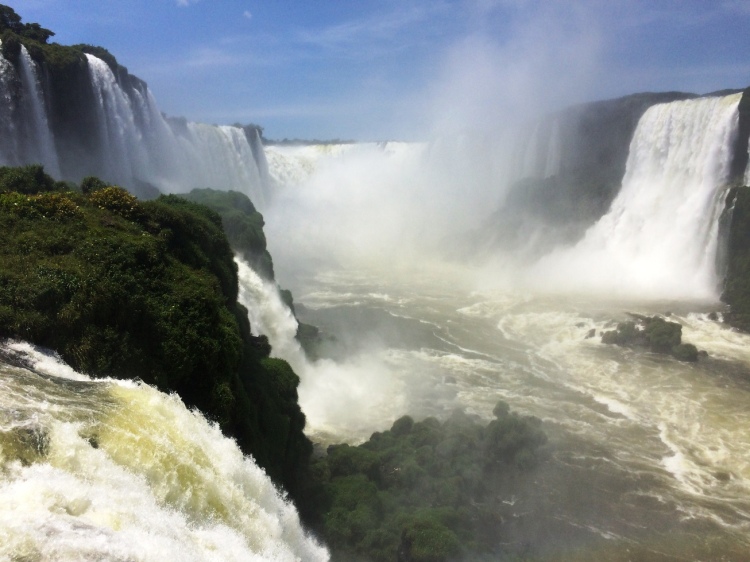 The highlight of it was probably the boardwalk at the bottom of Garganta del Diablo, which I had seen the top of the previous day in Argentina. 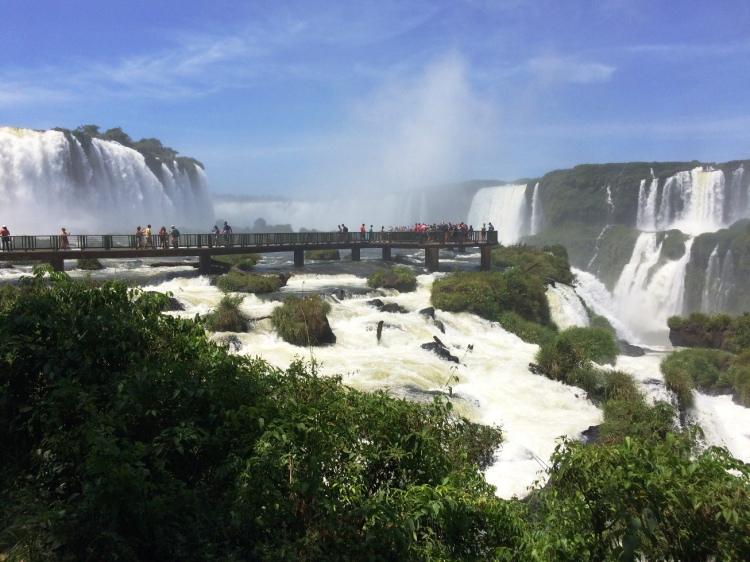 More videos of this side of the falls can be viewed here. I also caught some of them in slow motion too. 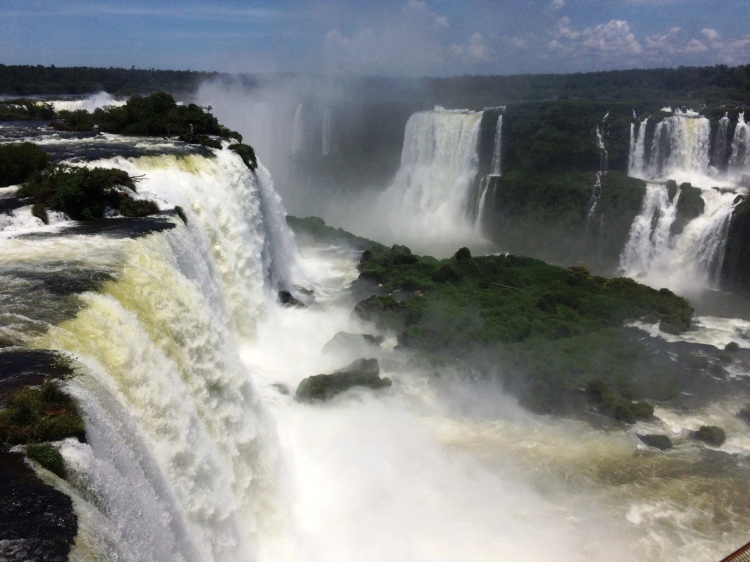 There is another wildlife centre by the Brazilian side of the falls called Parque Das Aves. It has a bit more a zoo feel than Güira Oga but does have a great collection of birds and they are involved in some conservation projects. 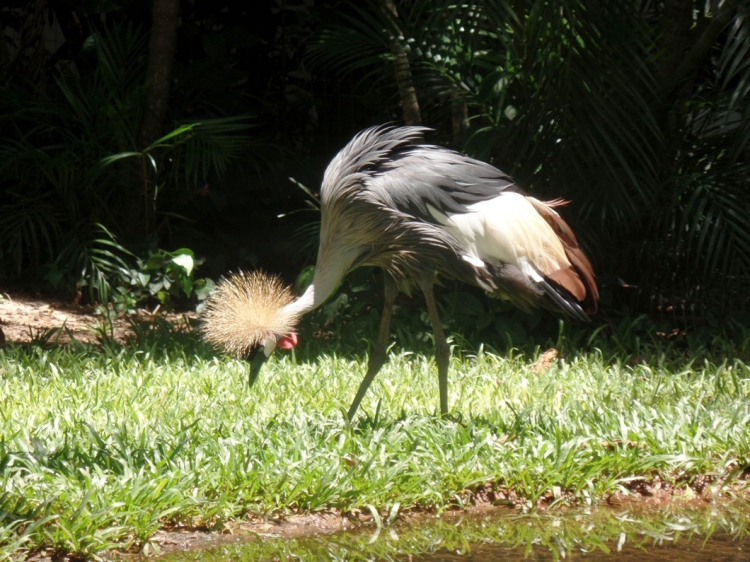 My last day in Iguazú, there wasn’t much left to do so I went for a walk around the town, soaked up the atmosphere, and also went to the Tres Fronteras Mirador. A place where you can stand where the Iguazú and Paraná rivers meet and look upon both Brazil (to the right) and Panama (to the left). 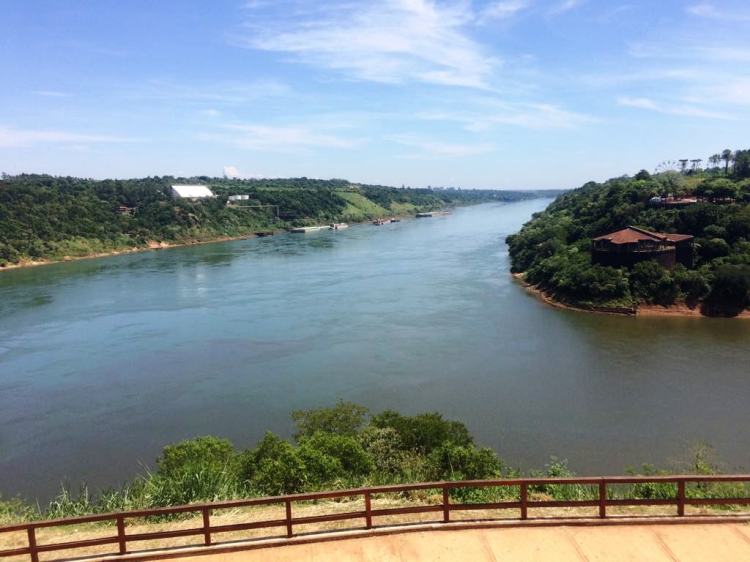 For more photos and videos from Mendoza or Iguazú click on the hyperlinks.