Back in Quito again. Although, this time I opted to stay in the Centro Historico; an area abandoned by most of the backpacker community who now prefer to stay in La Mariscal, with its modernised bars and international restaurants. Quito’s older district is a place most people dare to only venture during the daytime these days, and tourists, in particular, are warned not to wander around at night because knife-point muggings are common.

I have found it to be fine so far. When I venture out at night, I just take a few dollars in my pocket and nothing else. Nobody has given me any bother, apart from the occasional prostitute trying to lure me. The restaurants, shops, and just about everything are cheaper here and, even though it is a bit seedy, it has an atmosphere. It is a facet of Quito, and part of the experience.

I have been staying at Quito Backpacker Hostel. It has a friendly atmosphere, good wifi, and a terrace bar. It is quiet, but I didn’t mind, as I have spent much of the last few days relaxing and catching up with my blog. When I first arrived, I was their sole guest, but now we number almost in the double digits. I don’t understand why more people don’t stay here though; I checked out some of the other hostels nearby, and this place is much cleaner and better maintained, and yet it doesn’t receive as many guests as it deserves.

My evenings have often been spent visiting a vegetarian place a few blocks away called Govindas. It is run by a group of Hari Krishnas who have been helping me practice my Spanish. I also get to listen to them chanting their prayers from upstairs while I eat.

Over the weekend I made an overnight trip to Otavalo. A town to the north with a thriving market community going back hundreds of years. It is mostly known for its handicrafts and clothes but I didn’t buy anything because it is too early in my trip to be carrying excess stuff. I did enjoy wandering around though; soaking up the atmosphere and trying some of the street food. 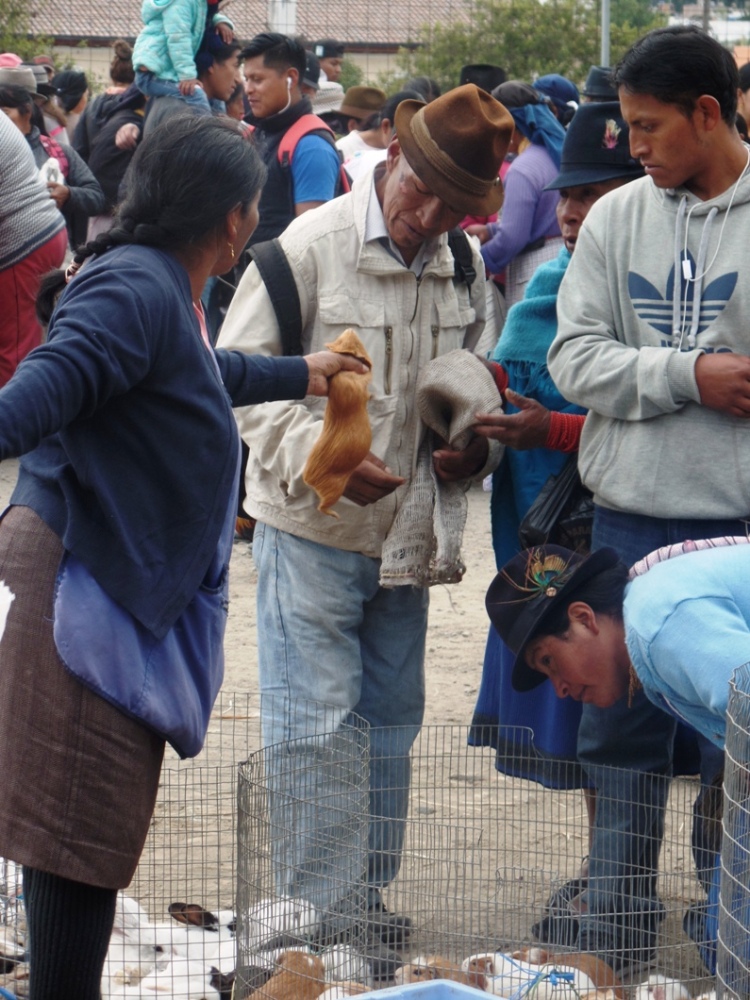 I ventured to its animal market too. It was a little challenging, seeing all those chickens, guinea pigs, rabbits, and all sorts of creatures crammed in tight little cages while still alive, and sold like produce. 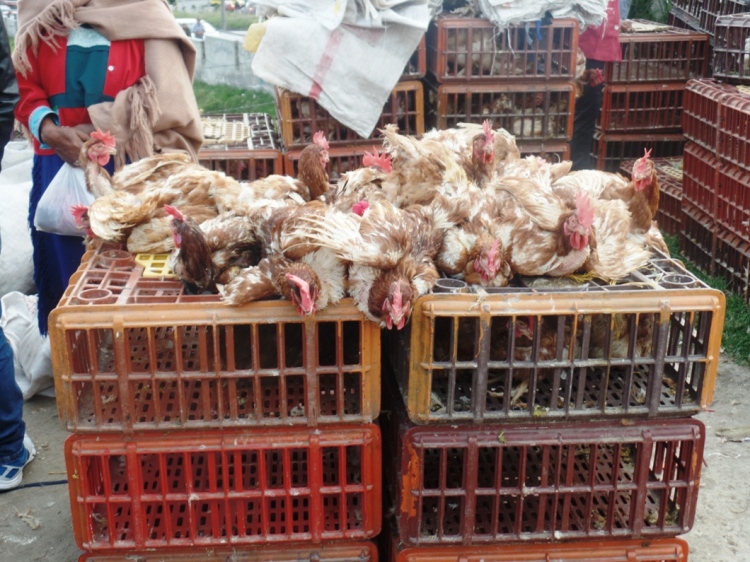 I guess one thing you need to remember when seeing sights like this is that, as a privileged person from the first world, it is problematic to judge. A lot of these people do not have luxuries we take for granted, such as fridges, so any meat they do eat has to be taken home alive so it doesn’t spoil. If you eat meat and live in a modern country, the only difference between you and them is that, for you, the cruelty occurs out of sight and mind.

The animal market wasn’t all a completely uncomfortable experience. There were some light moments there too. Such as seeing a young boy being taken there by his father to buy his first puppy, and seeing the smile on his face as he held the nervous creature for the first time. And not all of the animals were in cages, either. Some of them, even though they were being sold as food, seemed as though they had been well cared for. 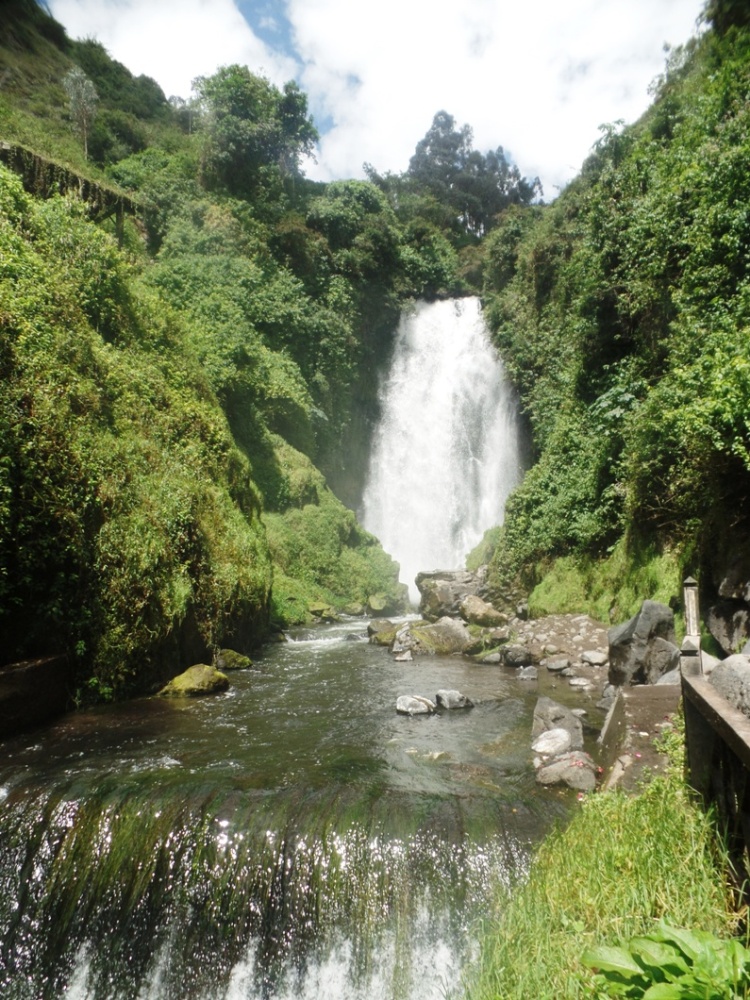 I also went to see a waterfall in a village called Peguche, just outside of Otavalo. A place which is still, to this day, sacred to the local Indians.

And, finally, I went to yet another museum. Although this one was not quite like any I had been to before. Museo del Pueblo Kichwa is set within a complex of old, abandoned buildings which used to be a textile factory. The Kichwa people were forced to work in horrible conditions there but, when it was closed (over a decade ago), a group of them bought it and turned it into a living museum.

I think I somewhat surprised them, coming on a Friday instead of the weekend, and thus the only person available to give me a tour who spoke any English was the young son of one of the owners. He wasn’t fluent, but his English was certainly much better than my Spanish. Sometimes, when he didn’t know the English words for what he was trying to explain, he gave it to me in Spanish, and I caught the general gist. He told me about their festivals, which seemed to always take place on the 21st of the month. And traditions such as the giving of twelve lashes to both parties as the penance for couples who divorce. He also told me about the yachacs; Kichwa shamans who have knowledge of herbs and will rub an egg across your forehead to diagnose ills.

I appreciated how hard he tried and, even though he couldn’t quite explain everything to my full understanding, it was still a rewarding visit. He and the rest of the people there were very warm, and I left there feeling like I’d had a genuine experience. 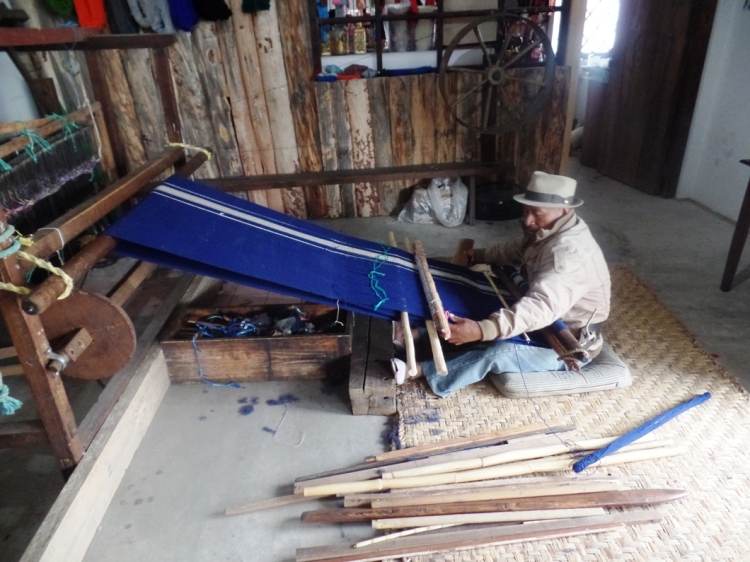 Venturing back to Quito again, I spent my last day there preparing. Tomorrow I fly to the Galapagos Islands.