After ten days spent in pretty but a little bit too touristy Palawan, it was time to move on. Me and my three companions – James, Chloe and Jody – boarded a plane. Our next destination was the Visayas; an archipelago of scattered islands which, due to its geographically central location and rich diversity, many consider to be the very heart of the Philippin­es.

Our plane touched down in Cebu. It was a smoggy, concrete-grey metropolis, and there didn’t seem to be any noteworthy attractions, so we caught a taxi straight to the pier and boarded a boat heading to Bohol. 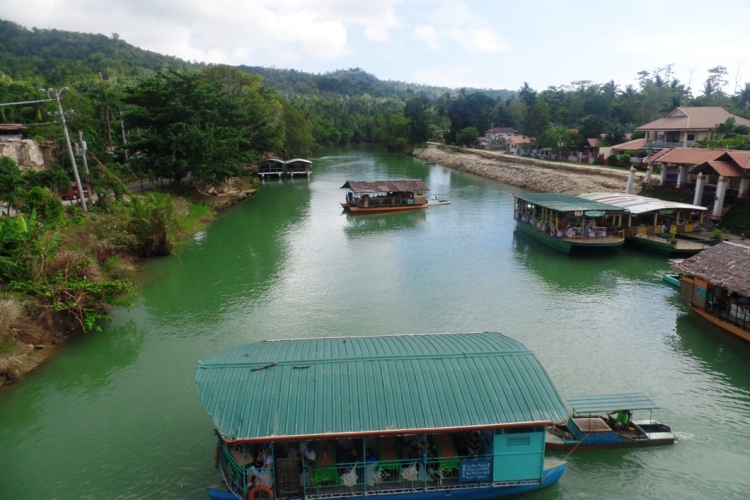 Most of the visitors to this island head straight to the beach in Panglao, for but the four of us had already spent much of the previous couple of weeks visiting various islands and lagoons, so we were in the mood for something a little less nautical. We stayed in a guesthouse called Nuts Huts near a village called Loboc. It was surrounded by jungle so it was swarming with mosquitoes, but all the noises of wildlife rustling around at night and the decked out restaurant area overlooking Loboc River, more than made up for that. 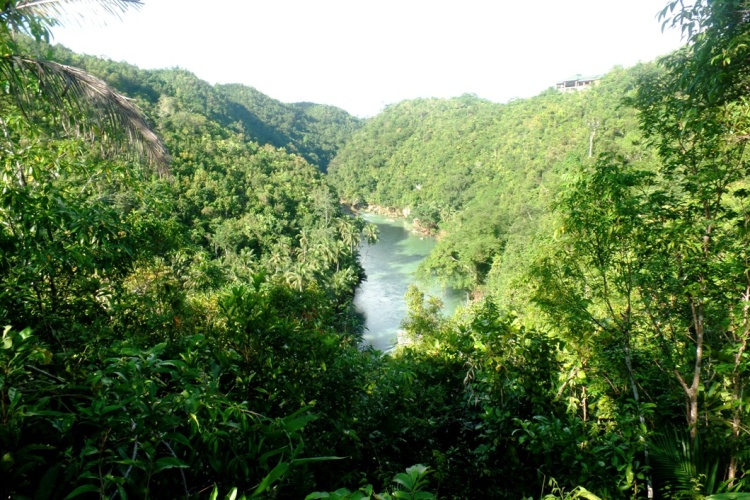 Our first outing during our stay there was to the nearby Tarsier Sanctuary, where I got reacquainted with the miniature primates I saw in the wild when I visited Tangkoko National Park a couple of months ago. These ones were a little bit smaller than their Sulawesian cousins and, because it was day rather than night, they were sleeping, which made them even more cute. 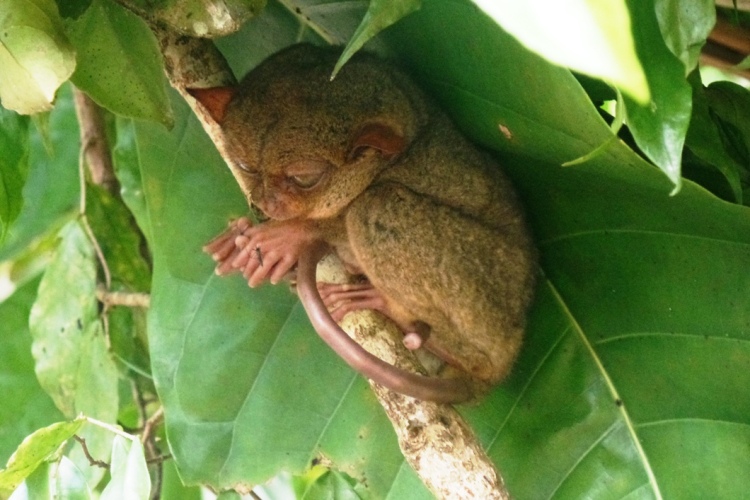 We also made a day trip to the Chocolate Hills, a geological oddity in Bohol’s interior: over a thousand almost identical hillocks which were formed by ancient reefs being lifted up from the seabed by tectonic activity. They are called the Chocolate Hills because in the dry season the grasses turn brown. 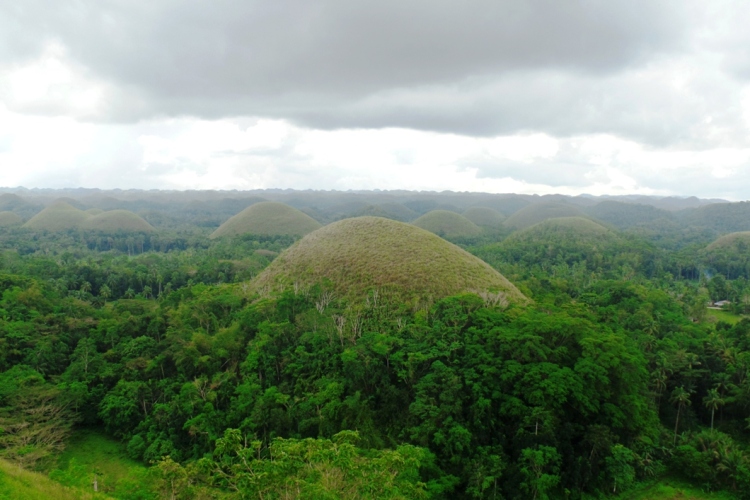 On our way back that day we also made a trip to the Simply Butterflies Conservation Centre in a village called Bilar. It wasn’t quite as good as the butterfly garden we had visited in Palawan a few days before, as the guides mostly relied upon little gimmicks like attaching docile butterflies to your face and telling jokes, rather than telling you much about science of the creatures.

Loboc itself was a quaint little village, and it has one of the oldest churches in the Philippines; San Pedro, which was severely damaged by an earthquake over a year ago.

Between being driven around all these various attractions during our stay we were treated to very pleasant views of Bohol’s rugged interior of forests, hills, and rice paddies.

On our final night there it was my birthday, so I celebrated with a bottle of wine.

After paying a boat fare which should be considered a crime (OceanJet are the only carrier who do a service between the two islands and, boy, don’t they know it), we arrived into Siquijor Island in the late afternoon and caught a tricycle straight to San Juan, where I caught one of the best sunsets I have ever seen.

The calm, almost still, waters acted like a mirror as the sun melted into the horizon, dispelling rich colours, and the people working in the seaweed farm turned into dark silhouettes.

The following morning we hired out some motorcycles to explore the island. James, Chloe and Jody managed to get ones which were not too bad, but I ended up being lumped with one that I will henceforth refer to as, ‘Piece-of-Shit’.

After giving Piece-of-Shit a kick start – and being reassured by the loaner, that the ignition would start working once the battery had warmed up – we set off along the coastal road. 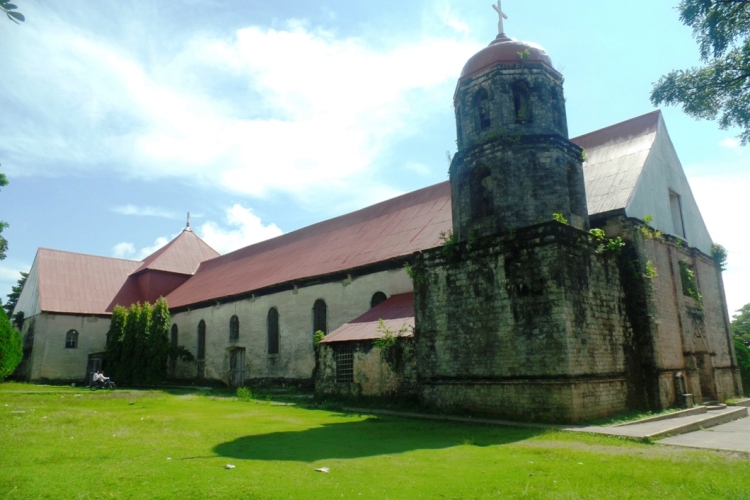 Our first stop was at San Isidro Labrador Church in Lazi. By the time we reached there I had already given Piece-of-Shit three kick starts and, when we had finished having a look around the charming nineteenth century relic of Spanish colonial times, I got back on to Piece-of-Shit and found that I could no longer get it started at all. A passing tricycle driver kindly tried to help but to no avail; he took a step back, shook his head, laughed, and said “it’s Chinese,” as a form of explanation.

He called up the owner for us, and we had to wait half an hour for him to arrive so he could fix Piece-of-Shit’s battery to get it running again. We then drove on to Cambugahay Waterfall.

Cambugahay Waterfall was simply lovely, and reminded me of Erawan in Thailand. It had four different tiers to swim in, and the waters were murky-blue. We got changed into our swimming gear and took a refreshing plunge into the lukewarm waters.

We then drove towards Salagdoong, and on our way there Piece-of-Shit killed its second battery. When I finally managed to kick-start it again the accelerator cable snapped. After much cursing and swearing, I handed Piece-of-Shit in to a repair shop and hopped onto the back of Jody’s bike, telling them we would pick it up in an hour. 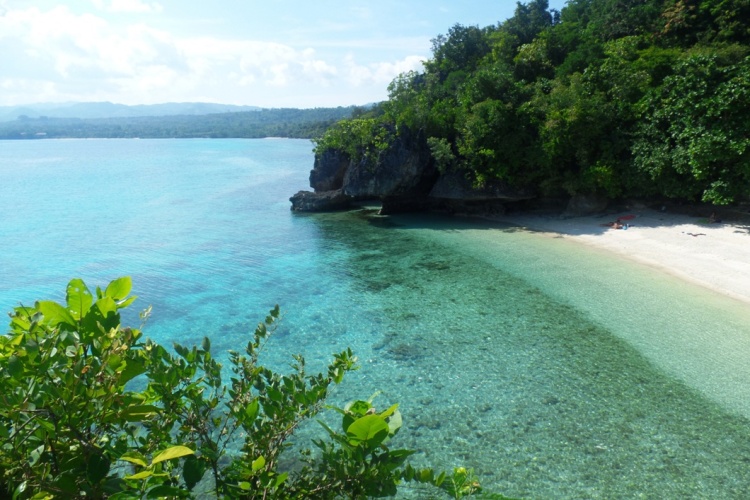 After driving through the middle of Salagdoong Nature Reserve, we reached the beach. It has unfortunately been privatised by government-owned Hotel Apripino, who have built a resort around the seafront, but the amount they charged us to enter wasn’t too extortionate. The beach is still very nice and there is a little peninsular between the two coves, which I climbed and managed to snap a picture of James swimming in the turquoise waters below.

When we got back we discovered that the guesthouse we were staying at – Czar’s Place – had a live band playing; a weekly event that most of the village (and tourists) turn up to. The four of us decided that trying to sleep was pointless – it was simply too loud – so we just embraced it, and drank. When I had polished off enough beers to knock myself out, regardless of the noise, I went to bed.

The following day was quite lazy, but James, Chloe and myself did work up enough energy to go snorkelling in the afternoon, where we saw lots of lovely corals.

For more photos of Bohol and Siquijor, go to my Flickr account. One of the photos from this blog was donated to me by James, whose photography website can be found here.

To read the other parts of my time in the Visayas, click on the following links: Part 2 (Apo Island, Dumaguette & Boracay), Part 3 (Tablas & Romblon), Part 4 (Sibuyan Island)

3 thoughts on “Travelblog#38: The Visayas Part 1 (Bohol & Siquijor) – the Philippines”